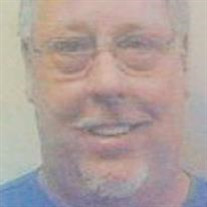 Gene Rogers, 62, of Fairmont, passed away at his home on Wednesday, May 22, 2019. He was born on July 05, 1956, in Fairmont, a son of the late Lyle E. Rogers Sr. and Doris Jean “Jeanie” (Shaver) Wilson. After graduating East Fairmont High School, Gene went on to serve his country in the United States Air Force and later went on to work at Fresenius as a Certified Critical Hemodialysis Technician for over 30 years. He will be remembered for his love of family, friends, and his dog, Sammy. Gene is survived by his brothers: Larry Rogers and wife Carla, of Morgantown, and Shawn Rogers, Mark Rogers, and Michael Rogers, all of Fairmont; his sister, Debbie Dorsey and husband Rodney, of Fairmont; his best friend, Sharon DeLuca, of Fairmont; his nieces and nephews: Janeen Floyd, Bill Morton, Darius Stills, Dante Stills, Daeshaun Floyd, Baylen Rogers, Hayley Freeze, Kemper Freeze, Dylan Freeze, and Zailey Jo Morton; and his stepmother, Sharon Boyce Rogers Moody, of Fairmont. In addition to his parents, Gene was preceded in death by his stepfather, Roger Lee Wilson, and his nephew, Phillip Andrew “Andy” Rogers. In keeping with Gene’s wishes, he will be cremated with all services being private. Carpenter and Ford Funeral Home has been entrusted with the arrangements.

The family of Gene Rogers created this Life Tributes page to make it easy to share your memories.

Gene Rogers, 62, of Fairmont, passed away at his home on Wednesday,...