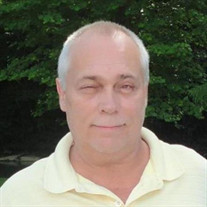 Gary Allen Massey, age 62, of Fairmont, WV, formerly of Arthurdale, died unexpectedly at 5:32 p.m. on Monday evening, July 13, 2020 at home with family by his side. He was born April 09, 1958, he was the son of the late Wilma Hazel (Massie) Boylen and his stepfather Carl Boylen, of Arthurdale. Gary was a 1976 graduate of Newburg High School. He recently retired, but through his years of employment worked in various capacities as a sales associate and as a CNA in the retail and healthcare industries, respectively. Over the years, he had worked for Lowe’s, Valley Healthcare and Little General convenience stores. Many folks throughout the Fairmont community became acquainted with Gary as the Assistant Manager of Sales at the Busy Beaver. Gary was a man of few words but had a heart of gold and would give the shirt off of his back to help anyone in need. He was an avid Pittsburgh Steelers and WVU Mountaineer fan. Above all, he loved his family beyond all measure. In addition to his stepfather, he is survived by the love of his life, Terri Lynne (Cutright) Rich-Massey, of Fairmont, whom he married on June 14, 2012. He is also survived by his two sons: Luke Massey, of Arthurdale; and Tyler Rich (Michaela Chisler), of Fairmont; two daughters: Amy Shaluta, of Charleston, WV; and Ashley Rich (Colin Sickles), of Fairmont; three brothers: Roger (Sandra) Massey, of Point Marion, PA; Rick Boylen (fiancé, Carla Knotts), of Arthurdale; Terry Boylen (Lora), of Reedsville; four sisters: Rita Clary (Frank), of Masontown; Donna Cornwell (John), of Independence; Diane Smith (Bill), of Newburg; and Sharon Norman (Mark), of Ohio; his mother-in-law, Barbara (Keefover) Cutright, of Farmington; five grandchildren: Jamaya, Savannah, Ashlynne, Miles and Truitt; and his beloved canine companion, Alex. Gary was preceded in death by his mother in 2015; grandmother, Edna Lillian (Messenger) Massie, in 1976; father-in-law, Earl E. Cutright, in 2019; beloved dogs, Bandit, Buster and JJ; and several aunts and uncles. In light of the current COVID-19 health crisis, visitors are asked to maintain social distancing and observe all recommendations and requirements set forth by the CDC and our local and state governments. With respect to all those attending, please keep your visit brief so all those who desire to pay their respects to the family have ample time to do so. Family and Friends may call at the Carpenter & Ford Funeral Home, 209 Merchant St., Fairmont, from 4:00 - 8:00 p.m. on Thursday and on Friday, July 17, 2020 from 11:00 am until the time of the funeral services at 1:00 p.m. with Evangelist Steve Snider and Evangelist Clinton Rowand officiating. Interment will follow in the McCurdysville Cemetery.

The family of Gary Allen Massey created this Life Tributes page to make it easy to share your memories.