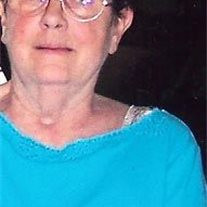 Freda Stewart Freda Florance Stewart, 66, of Baxter Community, passed away on Tuesday May 25, 2010 at her home. She was born in Fairmont on November 28, 1943, daughter of the late Clifford and Verdie Bunner Ledsome. Freda worked as an adult family care provider for the Marion County DHHR for 23 years until her illness in November 2009, she also worked at the former Bellview Foodland in the bakery department as a baker and decorator, and she also worked as a manager at the former Staud’s Motel and Three Ways Inn in Fairmont. Freda was a loving mother and grandmother who deeply enjoyed her family time and her unconditional love for her grandchildren. She also enjoyed gardening and was an exceptional cook. Freda was featured in John Veasey’s Column in the July 16, 2000 edition of the Times West-Virginian for having her three daughters all give birth within days of each other at Fairmont General Hospital. Those grandchildren are: Michael April 7, Merissa June 3 and Paige June 6. She was a proud mother and grandmother. She is survived by her three daughters and their husbands; Misty Lynn and John Lemasters of Rock Lake, Elizabeth Ann and Walter Mundell of McCurdysville, and Shelia Ann Cleaver of Fairmont; five grandchildren; Kendra Lemasters and Paige Lemasters of Rock Lake, Travis Davis and his fiancé Katie Butcher of Clarksburg, Merissa Mundell of McCurdysville, and Michael Cleaver of Fairmont; four sisters; Loretta Rundell, Naomi Wix, Ruth Keller, and Dorothy Uphold; four brothers; James Ledsome, Clarence Ledsome, Gilbert Ledsome, and Milford Ledsome; her former husband Carl Lee Stewart and his wife Dot of Philippi; her sister-in-law and brother-in-law, Marilyn and Lonnie Colbank; several nieces and nephews and their families, and also a special neighbor Patricia Elrod. In addition to her parents, Freda was preceded in death by a former husband N. Leon Davis, her former mother-in-law Evelyn J. Stewart and also a brother, Delbert Ledsome. Freda’s family would like to extend their sincere appreciation to Fairmont General Hospital, Dr. Menez, Dr. Ang, Ruby Memorial and the Health Net Team, and Hospice Care for their great care and support, as well as a special thank you to the staff and rehabilitation department of the Madison (Genesis) Center in Morgantown, WV. Family and friends may call at the Carpenter and Ford Funeral Home, 209 Merchant St., Fairmont on Friday May 28, 2010 from 1:00 - 9:00 pm. Funeral services will be held at the funeral home on Saturday May 29, 2010 at 11:00 am with Pastor Rex Musgrove officiating. Interment will follow at Grandview Memorial Gardens in Fairmont. Serving as pallbearers honoring Freda will be members of the Baxter Volunteer Fire Department and family. Online condolences may be sent to the family at www.carpenterandford.com

Freda Stewart Freda Florance Stewart, 66, of Baxter Community, passed away on Tuesday May 25, 2010 at her home. She was born in Fairmont on November 28, 1943, daughter of the late Clifford and Verdie Bunner Ledsome. Freda worked as an adult... View Obituary & Service Information

The family of Freda Florance Stewart created this Life Tributes page to make it easy to share your memories.