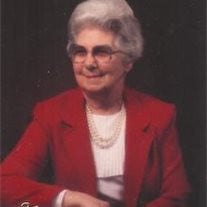 Frances Lucille Hammond, 92, of Clarksburg formerly of Fairmont, passed away on Wednesday, November 4, 2009 at the home of her caregiver Kathy Weekly of Worthington. She was born on August 25, 1917 at Jones Run in Harrison County, a daughter of the late Arthur F. Cumbridge and Coral Lyons Cumbridge. She was preceded in death by her husband Lawrence Hammond who passed away in 2004. Frances was a homemaker, mother, and grandmother. She had worked at the Working Man’s Store in Clarksburg in the shoe department . She also served as a cook at the Wilsonburg Grade School for several years. Frances was an avid West Virginia Mountaineer football fan and loved to watch them play on television along with her favorite show Jeopardy. She enjoyed collecting and sharing recipes with her family and friends. A deeply religious lady, she had attended the United Brethren Church at Wilsonburg for many years. She will be deeply missed by her family and friends. She is survived by her son Gary Hammond and his wife Cheryl of Clarksburg; her daughter Norma Jean Moore and her husband Kenneth of Madison Heights, Michigan and her brother Raymond Cumbridge and his wife Wilma of Fairlawn, Ohio. She was the much loved grandmother to four grandchildren Mike Hammond, Megan Hammond, Terri Moore and Brian Moore. She is also survived by several nieces and nephews. In addition to her parents and her husband, she was preceded in death by a brother Hughel Cumbridge and her sister Waverlyn Lindsey. Friends and family may call at Carpenter and Ford Funeral Home, 209 Merchant Street, Fairmont on Friday from 2pm to 8pm. Services will be held at the funeral home on Saturday, November 7, 2009 at 11am with Pastor Dwight Baldwin officiating. Interment will immediately follow at Floral Hills Cemetery. Mrs. Hammond’s family would like to thank Kathy Weekly and Hospice Care for the wonderful care they provided to Frances during her illness. Memorial contributions may be made to the American Cancer Society, 122 South High Street, Morgantown, WV 26501 and to Hospice-Care, 1408 Country Club Road, Fairmont, WV 26554.

Frances Lucille Hammond, 92, of Clarksburg formerly of Fairmont, passed away on Wednesday, November 4, 2009 at the home of her caregiver Kathy Weekly of Worthington. She was born on August 25, 1917 at Jones Run in Harrison County, a daughter... View Obituary & Service Information

The family of Frances Lucille Hammond created this Life Tributes page to make it easy to share your memories.