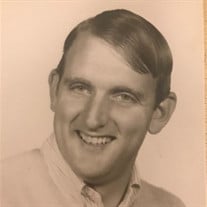 Felix “Tim” Wallow Garrett III, 74, of Fairmont, passed away on Sunday, October 11, 2020, at the Tygart Center at Fairmont Campus. He was born on February 10, 1946, in Fairmont, a son of the late Felix W. and Ruth (Eddy) Garrett. After graduating high school, Tim went on to proudly serve his country in the United States Navy, serving in Vietnam. He later went on to retire as Chief of Security at Fairmont Regional Medical Center. Tim was a lifetime member of Trinity Assembly of God Church. He loved sports and was a skilled golfer, and tennis player, receiving numerous trophies. He will be missed by many. He is survived by his sisters, Cookie Caldwell and husband Jim and Ellie Pagan, all of Florida; and brother, William “Bill” Garrett, of Arizona; and several nieces and nephews. In addition to his parents, he was preceded in death by his loving wife, Rebecca “Becky” Garrett; his brother, Robert “Jinks” Garrett. In keeping with his wishes, Tim will be cremated. Friends and family are welcome to attend the graveside service at Nuzum Cemetery on Wednesday, October 21, 2020 at 11:00 am by longtime friend, Pastor Roy Weese, officiating.

The family of Felix "Tim" Garrett III created this Life Tributes page to make it easy to share your memories.