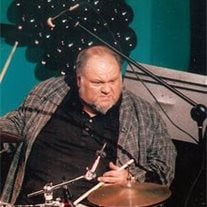 Eugene “Gene” Anthony Piccalo, 72, of Fairmont died on Saturday, September 12, 2009 at his home. He was born on July 7, 1937 in Fairmont a son of the late Anthony “Tony” Piccalo and Rose Spatafore Piccalo. Gene was an accomplished drummer and vocalist, performing all over the United States with numerous well known personalities. He later went on to organize and lead his own group and show, which toured Canada, the United States and Mexico for eight years. This group, called “Dot’s Trio” also won the Nortre Dame Jazz Festival competition in 1960 and 1961. Gene studied with such greats as the Oscar Peterson Trio in Canada, and drummer Shelley Mann. His vast range of experience and musical talents have thrilled audiences the world over. Gene was a graduate of East Fairmont High School. He began his musical career in high school with a group of local musicians. He was last employed as a teacher at Schmitt Music in Burnsville, Minnesota. He is survived by his brothers Richard Piccalo and his wife Kathy of Fairmont and Gary M. Piccalo of Fairmont; his nieces and nephews Michael Piccalo and his wife Amy of Boston, Massachusetts, Lela Ganoe and her husband Shawn of Kingmont and Jina Piccalo of Fairmont; and his great nieces and nephew Tony Piccalo, Allie Piccalo, Ava Piccalo, Laney Ganoe, Katelyn Ganoe and Christopher Ganoe. In addition to his parents, Gene was preceded in death by his maternal grandparents Salvatore Spatafore and Constance Muto Spatafore and his paternal grandparents Salvatore Piccalo and Constanzia Secreti Piccalo. Friends and family may call at Carpenter and Ford Funeral Home, 209 Merchant Street, Fairmont on Tuesday, from 2pm to 4pm and from 7pm to 9pm and on Wednesday from 11am to 1pm. Services will be held at the funeral home on Wednesday, September 16, 2009 at 1pm with Pastor Jim Zinn officiating. In keeping with the wishes of the deceased, his body will be cremated following the service.

The family of Eugene Anthony Piccalo created this Life Tributes page to make it easy to share your memories.