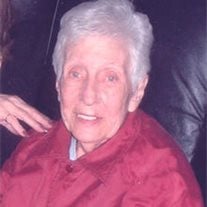 Robert Munchin and Heather Sabatino want to respectfully acknowledge the death of their mother and grandmother, Ethel Rachel Malcolm Munchin on Wednesday, July 29, 2009. She was born on April 30, 1912 in Braxton County, the daughter of the late Wade and Martha Malcolm. She was a Christian by faith and a loving wife, mother, grandmother, great grandmother and aunt. Ethel was also an avid bowler up until 90 years of age and enjoyed playing the slots until her 95th birthday. She was a huge fan of the Atlanta Braves. She is survived by her son Frank Robert "Bob" Munchin; one grand daughter Heather Sabatino; one grandson Frank Sabatino; and two great grandsons Frank Vincenzo "Vince" and Christian "Angelo" Sabatino. She is also survived by many nieces, nephews, cousins and cherished friends. In addition to her parents, she was preceded in death by her husband Frank Munchin in October 1983; her daughter-in-law Sheila Jan Blazek Munchin in November 2003; her sisters Gladys King, Merle Hartley, Ruth McCleary and her brother Wade Malcolm. Friends and family may call at Carpenter and Ford Funeral Home, 209 Merchant Street, Fairmont on Friday from 1pm to 9pm and on Saturday from Noon to 1pm. Services will be held on Saturday, August 1, 2009 at the funeral home at 1pm with Sister Stella Cronauer officiating. Interment will immediately follow at Mt. Carmel Cemetery. Serving as pallbearers will be Mike Caputo, Frank Caputo, Charles Wilson, Mark Nesselroad, Pete Piscitelli and Bob Munchin. We would like to thank Toni and Conchetta Iaquinta with whom our mother and grandmother had resided for the past couple of years. Their gifts of love, humor and compassion have known no bounds. We would also like to thank Hospice Care for giving her the comfort, grace and dignity which she so deserved during her last days. Memorial contributions may be made to Hospice Care, 1408 Country Club Road, Fairmont, WV 26554.

Robert Munchin and Heather Sabatino want to respectfully acknowledge the death of their mother and grandmother, Ethel Rachel Malcolm Munchin on Wednesday, July 29, 2009. She was born on April 30, 1912 in Braxton County, the daughter of the... View Obituary & Service Information

The family of Ethel Rachel Munchin created this Life Tributes page to make it easy to share your memories.