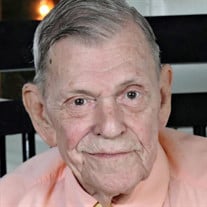 Elson Findley Jones, 87, of Fairmont, passed away on Tuesday, February 04, 2020, at J.W. Ruby Memorial Hospital. He was born on August 20, 1932, in Belington, West Virginia, a son of the late Charles M. and Ollie (Findley) Jones. Elson graduated from Fairmont State University with a Bachelor of Business Administration and proudly served his country in the United States Navy. He will be remembered for his love of family, friends, and neighbors. He is survived by his wife, Sandra Helmick Jones, of Fairmont. He is also survived by son, Greg Jones and his companion Daris Kinty, of Pierce; daughters: Sandra Jean Kurczak, of Fairmont, Mary Beth Jones and husband Randy Smith, of Fairmont, and Regina Jones-Patton, of Charleston; grandchildren: Angela Jones, Jessica Fluharty, Zachariah Jones, Joseph Cain Kurczak, Audrie Smith, and Lakin Patton; and six great-grandchildren. In addition to his parents, he was preceded in death by brother, Loring Jones and sister, Loverine Chittister. Family and friends are welcome to call for visitation at Carpenter and Ford Funeral Home, 209 Merchant St., Fairmont, on Wednesday, February 12, 2020, from 1 p.m. – 3 p.m., with the memorial service being held at 3:00 p.m., at the funeral home, with Pastor Matt Holbert officiating. In keeping with his wishes, Elson has been cremated. Carpenter and Ford Funeral Home is honored in being trusted with all arrangements.

The family of Elson Findley Jones created this Life Tributes page to make it easy to share your memories.

Elson Findley Jones, 87, of Fairmont, passed away on Tuesday,...