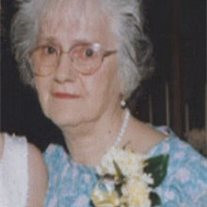 Ellen “Libby” Harvey Lowe Ellen “Libby” Kisner Harvey Lowe, 78, of Haywood Community, passed away on Thursday morning, February 4, 2010 a daughter of the late Edward Kisner and Rebecca Ellen Huffman Kisner. She was a homemaker, wife and devoted mother, grandmother and great grandmother. Early in life she had worked at St. Barbara’s Nursing Home in Monongah. She continued her role as a caregiver thru out her life with family and friends. Libby attended Calvary United Methodist Church in Clarksburg. She was especially fond of spending time with her family. She is survived by her sons, Robert Harvey and his wife Charlotte of Clarksburg; Timothy Harvey of Haywood, and Mark Harvey and his wife Brenda of Youngstown, New York; her daughters, Linda Minnix and her husband Robert of Auburndale, Florida and Debora Harvey of Haywood; a step son, Craig Lowe and his wife Kim of Rivesville; her sisters, Dorothy Haddix of Jordan, Gladine Williams of Fairmont, Dellia Pheasant and her husband Keith of Fairmont and Flora Williams of Delaware; her very special grandchildren and their spouses, Richard and Mae Minnix, Robert E. and Amy Harvey, Jennifer and Russ Kinney, Joshua, Melissa, Michelle, Christopher Harvey ; Great Grandchildren Alexis, Annika, Amelia and Arika and several nieces and nephews. Step-Grandsons Guy and Daniel Lowe. In addition to her parents, Libby was preceded in death by her first husband, Rev. Robert Harvey, Sr. on May 6, 1970 and her second husband, Daniel L. Lowe on December 10, 1999 and two brothers, Edward Kisner and Sherman Kisner. Family and friends may call at the Carpenter & Ford Funeral Home, 209 Merchant Street on Saturday from 1pm to 9pm and Sunday noon to 2pm. The funeral service will be held at 2pm on Sunday, February 7, 2010 at the funeral home with Rev. Etheldean Yanero officiating, assisted by Rev. Pete Roberts. Online condolences may be sent to the Lowe and Harvey Families at www.carpenterandford.com

The family of Ellen E. Harvey Lowe created this Life Tributes page to make it easy to share your memories.