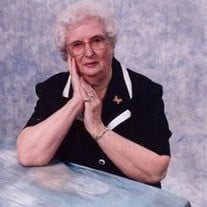 Elizabeth Hannah Towles Elizabeth Hannah Towles, 94 of Morgantown, passed away Thursday, March 25, 2010 at Fairmont General Hospital with her loving family at her side. Elizabeth, commonly known, by all who loved her as Grandma Hannah, was born on October 24, 1915, in Masontown, Pennsylvania the daughter of the late Henry D. Lake and Sarah McCann Lake. Elizabeth grew up in Marion County, graduated from Barrackville High School in 1934, and spent her entire adult life as a resident of Fairmont. Elizabeth had many passions in life, but none greater than her uncompromising love for her family. She loved spending time and caring for her grandchildren, and later in life her great-grandchildren. She enjoyed reading, embroidering, and most of all she treasured the spring season and would spent long hours planting flowers, feeding squirrels, and watching birds. Grandma Hannah will be sadly missed by all of those lives she touched with her unselfish caring and gentle kindness. She is survived by her daughter Patty Williams and husband Darrell Williams of Pelton, South Carolina, a brother Louis Woodrow Lake of Arnettsville, three grandchildren Brenda Beatty and husband Bob Beatty, Jr., of Morgantown, Barbara Boord and husband Mark Boord of Fairmont and grandson Michael Williams of South Carolina, She is also survived by her five cherished great grandchildren Josh and Hannah Neely, Brandi Boord, and Megan and Zach Williams. In addition to her husband John, she was preceded in death by four brothers Henry Lake, Kenneth Lake, Russell Lake and Delbert Lake. Family and friends may call at the Carpenter and Ford Funeral Home, 209 Merchant Street, Fairmont on Saturday from 7-9 p.m. and Sunday from 1-4 and 6-9 p.m. Funeral services will be held at 11am on Monday, March 29, 2010 at the funeral home with Pastor Bob Barker officiating. Burial will follow at Monumental Cemetery. Online condolences may be sent to the Towles Family at www.carpenterandford.com.

The family of Elizabeth Hannah Towles created this Life Tributes page to make it easy to share your memories.