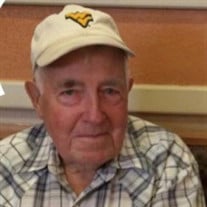 Edward Burton “Bob” Linn, of Fairmont, Passed peacefully on Friday, April 2, 2021 with his family by his side. He was born on January 10, 1928 to the late Clarence Linn and Mary C. Heston Linn. Bob served bravely in the United States Navy and worked his whole life proudly as a self-employed construction worker having his own dozer, high-lift, and other equipment. In the year 1948, he met his wife Helen Louise Evans. Together they shared two daughters and were happily married for 72 years. In addition to his parents, Bob was preceded in death by his brothers Jimmy Linn and Patrick Heston; a sister Sandy Linn; and Shirley Hobbs whom he raised from the age of 7 years old. May they all rest in peace and be reunited once again. Bob is survived by his loving wife Helen, his daughters Bobbie Diane Vincent and her husband Rick and Brenda Layman and her husband Larry, all of Fairmont. He is also survived by his three sisters Jackie Linn and her companion John Steffan, Sharon Wandling, and Betty Jean Linn all of Akron, Ohio; one brother Bill Linn and his wife Kay of Akron, Ohio; and three grandchildren Brian Vincent and his wife Missy of Fairmont, Kelsie Dudas and her husband Ryan of Waynesburg, PA, and Michelle Wilson and her husband Eric also of Fairmont. Bob is also survived by his great grandchildren Kambreigha, Nevaeh, Denver, and Deacon Dudas all of Waynesburg, Pennsylvania and Mason Watton of Fairmont, and Mackenzie and Bellamy Wilson of Fairmont. Friends are welcome at Carpenter and Ford Funeral Home on Tuesday from 4 – 8 p.m. and Wednesday from 12:00 p.m. to 1:00 p.m. A funeral service will be held at the funeral home on Wednesday, April 7, 2021 at 1:00 p.m. with Pastor Jim Zinn officiating. In keeping with his wishes his body will be cremated and his cremains will be laid to rest at West Virginia National Cemetery at a later date. In Bob’s memory, contributions may be made to Amedysis Hospices. A special thanks to Corina, Courtney, Angie and Brenda his care givers from Amedysis Hospice.

Edward Burton &#8220;Bob&#8221; Linn, of Fairmont, Passed peacefully on Friday, April 2, 2021 with his family by his side. He was born on January 10, 1928 to the late Clarence Linn and Mary C. Heston Linn. Bob served bravely in the United States... View Obituary & Service Information

The family of Edward Burton Linn created this Life Tributes page to make it easy to share your memories.