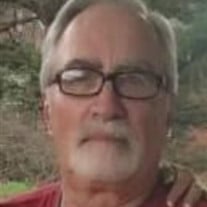 Edgar Fay Garlow, 77, of Fairmont, passed away on Wednesday, May 19, 2021 at WV Caring Hospice in Elkins. He was born October 18, 1943, in Fairmont; the son of the late Edwin L. Garlow and Virginia (Watkins) Garlow. Edgar enjoyed camping, fishing, and golfing. He loved watching high school sports with his children and his grandchildren. He most of all enjoyed time with family, especially his grandchildren. He was a dedicated member of Viola Church. He graduated from East Fairmont High School in 1961. Edgar worked at the Sharon Steel Plant in the 60’s and Alcan Aluminum in the 70’s and the 80’s. In 1984, he became the owner and operator of T & L Hot Dogs in Mannington, which he continued to own until 2005 when his son Jeffrey took over the business. He also started the Our Back Porch Ice Cream and More business which is now ran by his daughter Kimberly. Edgar is survived by his loving wife of 56 years, Diana VanGilder Garlow; two sons Bryan F. Garlow and his wife Regina of Ohio and Jeffrey L. Garlow and his wife Michelle of Fairmont; one daughter, Kimberly McCullough and husband Shawn of Fairmont; five grandchildren, Bailey Garlow, Zachary McCullough, Kara McCullough, Megan McCullough and Emme Garlow. Edgar is also survived by his twin brother, Donald “Don” Garlow, and his wife Mary of Fairmont; and brother, Robert “Bob” Garlow of Fairmont and several nieces and nephews. In addition to his parents, he was preceded in death by his brother, Charles L. Garlow and his wife Sandra; grandparents, Larney and Hallie Garlow; John and Bessie Watkins. Memorial contributions may be made in Edgar’s name to WV Caring Hospice at 169 Diamond Street, Elkins, WV 26241. Family and friends are welcome to call at Carpenter and Ford Funeral Home, 209 Merchant St., Fairmont, on Saturday from 1:00 – 8:00 p.m. and on Sunday from 12:00 p.m. until 1:00 p.m. A service will be held at the funeral home on Sunday, May 23, 2021 at 1:00 p.m. with Pastor Scott Krepps officiating. Interment will follow at Mt. Zion Cemetery.

Edgar Fay Garlow, 77, of Fairmont, passed away on Wednesday, May 19, 2021 at WV Caring Hospice in Elkins. He was born October 18, 1943, in Fairmont; the son of the late Edwin L. Garlow and Virginia (Watkins) Garlow. Edgar enjoyed camping,... View Obituary & Service Information

The family of Edgar Fay Garlow created this Life Tributes page to make it easy to share your memories.

Edgar Fay Garlow, 77, of Fairmont, passed away on Wednesday,...