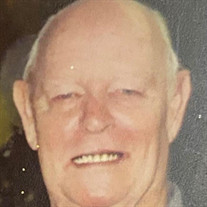 Earl Gibson Linn, 92, of Fairmont, passed away on Monday, January 31, 2022, at the Louis A. Johnson VA Medical Center. He was born November 29, 1929, in Kingmont, a son of the late Hiram Oscar Linn and Sina Rice Linn. He grew up in Kingmont. He attended Kingmont Grade School and graduated from East Fairmont High School in 1949. He is survived by his loving wife of 68 years, Jo Ann Ralphsnyder Linn; daughters, Deborah Jo Layman (William), Kim Haught (Randy); grandchildren, Amanda Masters (Shawn), Christopher Layman, Jarrod Layman (Marisa); great-grandchildren, Tristin Channell, Brentley Layman, Dawson Layman and Ryder Layman; several nieces and nephews; and a brother in law, Bill Ralphsnyder. During and after high school, Earl worked for Bill Harvey at Harvey’s Esso Station. He was employed by Wilson Ford Garage in Fairmont and Pulice Ford Garage in Shinnston. He retired from Pulice Ford. He proudly served in the United States Marine Corp during the Korean War era from 1951-1953. He sustained life changing injuries in the war due to a land mine. The injuries did not stop him from doing the things he loved, including hunting, fishing, and singing in his cousin’s band “The Country Sparks”. Earl was totally supportive of his daughters and grandchildren in all they did. He was always there for everyone. Earl was a member of the Marine Corp League and loved going to the meetings and talking with fellow Marines. In addition to his parents, Earl was preceded in death by his siblings, Grover M. Linn, Mary Louise Linn and an infant sister, Pauline; and a brother in law, Gordon “Bud” Ralphsnyder. The family would like to thank his caregivers, Brooklyn, Monique, Tessa and Dottie for their care of Earl. Family and friends may call at Carpenter and Ford Funeral Home, 209 Merchant Street, Fairmont, on Wednesday, February 2, 2022, from 2:00-8:00 p.m. Funeral services will be held on Thursday, February 3, 2022, at 11:00 a.m. at Carpenter and Funeral Home with Evangelist Brent Gallagher officiating. Interment will follow at Samuel Linn Cemetery. Condolences and memories may be shared with the family online at www.carpenterandford.com.

Earl Gibson Linn, 92, of Fairmont, passed away on Monday, January 31, 2022, at the Louis A. Johnson VA Medical Center. He was born November 29, 1929, in Kingmont, a son of the late Hiram Oscar Linn and Sina Rice Linn. He grew up in Kingmont.... View Obituary & Service Information

The family of Earl Gibson Linn created this Life Tributes page to make it easy to share your memories.

Earl Gibson Linn, 92, of Fairmont, passed away on Monday, January...