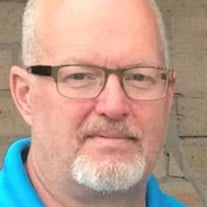 Douglas Glen Heflin, 54, of Fairmont, passed away on Wednesday, May 15, 2019, at his home surrounded by his loving family. He was born on August 26, 1964, in North Carolina, a son of Arlie Glen Heflin Jr. and Willa Jean (Arbogast) Heflin, both of North Carolina. After graduating East Fairmont High School, Douglas went on to service his country in the United States Marine Corp. He later went on to work as a truck driver for Dr. Pepper, and as a supervisor for Circle K. He umpired Little League and was the Director of Church League Basketball in Marion County, and rode with the GWRAA Chapter I motorcycle club. He will be remembered for his love of children, and coaching and teaching sports, but most of all, as being a loving father and husband. In addition to his parents, Douglas is survived by his loving wife of 23 years, Brenda Heflin. He is survived by daughter, Ashleigh Heflin, of Fairmont; sons: Casey Neil Heflin and fiancé Susan Wasner, of North Carolina, Coleton Heflin, of Fairmont, Christopher Watkins and fiancé Nicole Anderson, of Beckley, and Trent Heflin, of Fairmont; and nine grandchildren: Camden Heflin, Hayden Edens, Kassidy Edens, Carter Heflin, Weslee Heflin, Alex Watkins, Madison Vanetta, Liam Watkins, and Abriella Arellano. Douglas is also survived by brothers: Roger Heflin and wife Jennifer, Scott Heflin and wife Lori, and Greg Heflin and wife, Amy, all of North Carolina; mother and father-in-law, Lewis and Bonnie Davis Jr., of Fairmont, as well as several loving nieces, nephews, aunts, uncles, friends, cousins, and neighbors. Douglas was preceded in death by brother, Bradley Heflin; and grandparents: Eva and Arlie G. Heflin Sr. and Roy and Sara Mina Arbogast. The family would like to thank Amedysis Hospice for their loving care and support, but especially nurse Tammy Clifton. In lieu of flowers, the family requests that memorial contributions be made to Carpenter and Ford Funeral Home. Family and friends are welcome to call at Carpenter and Ford Funeral Home, 209 Merchant St., Fairmont, on Friday from 1 p.m. – 8 p.m. and on Saturday from 10 a.m. – 11 a.m., with services taking place on Saturday, May 18, 2019 at 11:00 a.m. at the funeral home with Pastor Jim Zinn officiating. Interment will follow at Nuzum Cemetery with Full Military Honors provided by the Marion County Veterans Council Honor Guard.

Douglas Glen Heflin, 54, of Fairmont, passed away on Wednesday, May 15, 2019, at his home surrounded by his loving family. He was born on August 26, 1964, in North Carolina, a son of Arlie Glen Heflin Jr. and Willa Jean (Arbogast) Heflin, both... View Obituary & Service Information

The family of Douglas Glen Heflin created this Life Tributes page to make it easy to share your memories.

Douglas Glen Heflin, 54, of Fairmont, passed away on Wednesday,...