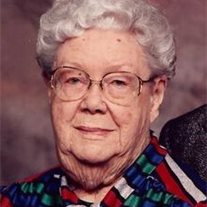 Dorothy McDaniel Dorothy (Moran) McDaniel, 94, of Fairmont, formerly of Halleck Road Community, went to meet her Lord and Savior on Sunday March 6, 2011 at the Arbors at Fairmont. She was born in Clinton Furnace, Monongalia County on June 21, 1916 the only child of the late Claud Odus and Bertha(Gwyn) Moran. She was preceded in death by her loving husband of 69 years, Lucian Burwell McDaniel who passed away in August of 2010. The couple married in 1941. Dorothy was a homemaker and was a faithful member of Bethel Baptist Church for 79 years where she served as a teacher, pianist and church clerk until her failing health made it necessary to retire. She is survived by one son, Gary McDaniel, Sr. and his wife Mary of Fairmont, three grandchildren, Gary W. McDaniel, Jr. And his wife Christine, Erika Smith and her husband Kyle, Andrew McDaniel, one step-grandchild, Becky Wright, and eight great grandchildren, who were her “pride and joy”, AJ Linn, Laramie Linn, Brody McDaniel, Holly McDaniel, Ian McDaniel, Taylor Smith, McKenzie Wright, and Hunter Wright. Mrs. McDaniel’s family wishes to express their sincere thanks and appreciation to all the caretakers and friends for their loving care. Family and friends may call at the Carpenter and Ford Funeral Home, 209 Merchant Street, Fairmont on Tuesday from 4-8 pm and on Wednesday from 12-2 pm. The funeral service will be held at the funeral home on Wednesday March 9, 2011 at 2:00 pm with Pastor Edward Moats of the Bethel Baptist Church, assisted by Paul Stewart of the Oakwood Road Church of Christ in Charleston officiating. Interment will follow at the Summers Cemetery on Halleck Road. Contributions may be made to the Bethel Baptist Church, c/o Kenneth Barbour 138 Barbour Road, Morgantown, WV 26508. Online condolences may be left for the family at www.carpenterandford.com

Dorothy McDaniel Dorothy (Moran) McDaniel, 94, of Fairmont, formerly of Halleck Road Community, went to meet her Lord and Savior on Sunday March 6, 2011 at the Arbors at Fairmont. She was born in Clinton Furnace, Monongalia County on June... View Obituary & Service Information

The family of Dorothy McDaniel created this Life Tributes page to make it easy to share your memories.