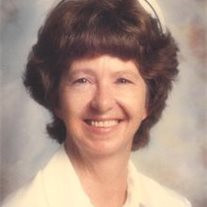 Doris Jean Wilson Doris Jean "Jeanie" Wilson, 76, of Fairmont passed away Wednesday, July 13, 2011 at her home. She was born in Fairmont on May 27, 1935, a daughter of the late Clarence and Edna Pearl (Rutherford) Shaver. Jeanie was an LPN by trade working at Wishing Well Health Center for over 20 years, the Marion County Senior Center and most recently at John Manchin Health Center. She was an avid West Virginia University sports fan, especially basketball. She also enjoyed cooking for her family, especially for large family gatherings. She is survived by her loving husband of 42 years this September, Roger Lee Wilson of Fairmont, two sons, Larry Rogers of Fairmont and Gene Rogers of Fairmont, one daughter, Debbie Dorsey and her husband Rodney of Fairmont, three grandchildren, Janeen Floyd, Bill Morton, and Phillip Andrew "Andy" Rogers, and seven great-grandchildren, Darius Stills, Dante Stills, Daeshaun Floyd, Baylen, Haley, Kemper, and Dylan Rogers. Also surviving are two sisters, Pam Brown of Fairmont and Cora Delligatti and her husband Frank of Fairmont, several nieces and nephews including, Frank Delligatti and his wife Marsha, Victor Delligatti and his wife Liz, Tom Delligatti and his wife Barb, Kathy Floyd, Michael Floyd, Wayne Brown and his wife Nancy and Patty Toothman and her husband Dave, as well as a great-niece, Lindsey Floyd. In addition to her parents, she was preceded in death by a sister, Elsie Mae Floyd, a nephew, Tom Floyd and a brother-in-law, Paul Brown. Family and friends may call at the Carpenter and Ford Funeral Home, 209 Merchant St. Fairmont on Friday from 1-8 pm and on Saturday from 10-11 am. The funeral service will be held in the funeral home on Saturday, July 16, 2011 at 11 am with Pastor Wayne Brown officiating. Interment will follow at Beverly Hills Memorial Gardens in Westover. Online condolences may be left for the family at www.carpenterandford.com

Doris Jean Wilson Doris Jean "Jeanie" Wilson, 76, of Fairmont passed away Wednesday, July 13, 2011 at her home. She was born in Fairmont on May 27, 1935, a daughter of the late Clarence and Edna Pearl (Rutherford) Shaver. Jeanie was an LPN... View Obituary & Service Information

The family of Doris "Jeanie" Wilson created this Life Tributes page to make it easy to share your memories.