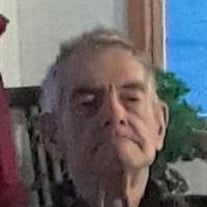 Reverend Donald Doral “Pete” Stemple Sr, 89, of Fairview, passed away on Tuesday, January 22, 2019. He was born on June 09, 1929, in Grantsville, the only son of the late Boyd A. and Locia Blosser Stemple. Don was a preacher for over 40 years, a mechanic, a certified electrician, a carpenter, and an all- around tinker. He loved building things and talking to people. Don proudly served his country in the United States Army in Germany during the Korean War as a cook. Don was a happy-go-lucky person and never knew a stranger. He had a great personality and was liked by all. He was always ready to help anyone who needed help, day or night, and never expected anything in return. Don loved watching westerns on TV when he got older. He enjoyed playing rummy with his daughter, Helen. In addition to his parents, Don was preceded in death by his ex-wife, Lou Riddle; his oldest son, Donnie; his oldest daughter, Patty K. Jackson; and two grandsons, Tony Moore and Mark Stemple. Don is survived by one daughter, Helen Moore and husband Jim, of Fairview; three sons: Doug Stemple Sr. and John Stemple, of Four States, and Donald “DJ” Stemple and wife Amy, of Pine Bluff; two step-sons, James Ray and Sam Ray, of Logan; a son-in-law, Randy Jackson, of Fairmont; and his ex-wife and best friend, Virginia Ward, of Fairview. Don was blessed with grandchildren: Michael Stemple, Kenny Lee Stemple, Randy A. Jackson, Christine Clossen, Melinda Heston, Sharon Strothers, Misty Cleavenger, Kim Nine, Tonya Hubbert, and Doug Stemple Jr.; 27 great-grandchildren, and 6 great-great grandchildren. Family and friends are welcome to call at Carpenter and Ford Funeral Home, 209 Merchant Street, Fairmont, on Friday, January 25, 2019 from 10 a.m. – 2 p.m., with services taking place at 2:00 p.m. at the funeral home, with Evangelist Peter Ray Cole officiating. Interment will follow at Clermont Cemetery with Full Military Honors conducted by the Marion County Veterans Council Honor Guard and United States Army Reserves from Camp Dawson.

The family of Donald Doral Stemple Sr. created this Life Tributes page to make it easy to share your memories.