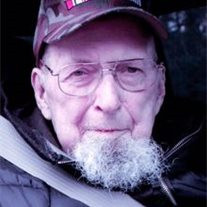 Donald R. Hayhurst Donald Ray Hayhurst, of Piney Run Community, passed away on Friday, April 7, 2017 at his home. He was born on May 12, 1934 in Marion County a son of the late Blaine and Martha (Hawkins) Hayhurst. Donald, a graduate of East Fairmont High School, was a Christian by faith. He attended the Mt. Sharon Free Methodist Church. He was a U.S. Navy Veteran who served on the U.S.S. Vulcan, a Life Member of VFW Post #7048, a member of the American Legion, and commander of the Disabled American Veterans #45. He retired from the U.S. Post Service where he was the Postal Carrier for RR #1, Fairmont and had served as a supervisor of the carriers. Donald was a great singer and mandolin player who was inducted into the Country Music Hall of Fame at the Sagebrush Round-Up, where he played in their stage band. He is survived by his loving wife, M. Jane Hayhurst; his son, Ronnie Hayhurst and his wife, Wendy of Bunner Ridge; his daughter, Debbie Friend and her husband Donald of Bunner Ridge; and his brother, Paul Hayhurst. Also surviving are his grandchildren and their spouses, Shannon and Nathan Barkley, Chandra Henderson, Michele and Michael Layman, Marla Henderson, Jeremy and Heather Hayhurst; great grandchildren, Kaitlyn, Tyler, Tanner, Makayla, Kyle, Hailey, Emma, Tayler, Parker and Ava; and his "buddy and pal" Smokey, his dog. In addition to his parents, Donald was preceded in death by his sister-in-law, Edith Mae Hayhurst. Friends and family may call at the Carpenter & Ford Funeral Home 209 Merchant Street, Fairmont on Sunday from 3 – 7 pm, Monday from 1 – 8pm, and Tuesday from 10 – 11am. The funeral service will be 11:00 am Tuesday, April 11, 2017, at the funeral home with Pastor John Knoll and Pastor Austin Lynch officiating. Interment will follow at the West Virginia National Cemetery with full military rites conducted by the Marion County Military Veterans Council Honor Guard.

Donald R. Hayhurst Donald Ray Hayhurst, of Piney Run Community, passed away on Friday, April 7, 2017 at his home. He was born on May 12, 1934 in Marion County a son of the late Blaine and Martha (Hawkins) Hayhurst. Donald, a graduate of East... View Obituary & Service Information

The family of Donald Ray Hayhurst created this Life Tributes page to make it easy to share your memories.