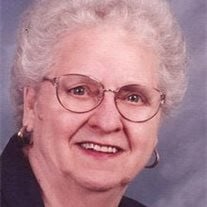 Dolris Jean Layman Dolris “Dottie” Jean Layman, 81, of Fairmont, passed away on Wednesday October 13, 2010 at her daughter’s home. She was born in Marion County on November 17, 1928, a daughter of the late Harman T. and Helena G. Mattox Saunders. She was preceded in death by her loving husband of 44 years, James E. “Jim” Layman who passed away on October 13, 1995. Dottie was a homemaker and had worked at Westinghouse in her earlier years. She was a dedicated poll worker and a very dedicated volunteer to East Fairmont High School. She was a member of the Recon Club of Fairmont, a Cub Scout leader, a Girl Scout leader, a member of the H & H Chapel and the H & H Chapel Women’s Auxiliary. She is survived by two sons; James Michael Layman and his wife Debbie of Fairmont, and Charles Patrick Layman and his wife Becky of Rivesville; a daughter, Rebecca Jean Markley and her husband Rodney of Fairmont; a sister, Margaret Riffle of Fairmont; a brother, James Saunders and his wife Mary of Ravenswood; five grandchildren, Charles “Chuck’ Layman, Jennifer Walker, Michelle Duckworth, Michael Paul Layman, and Craig DeBastian; nine great grandchildren, as well as several nieces and nephews. In addition to her parents and husband, Dottie was preceded in death by a sister, Lillian Saunders, and a brother-in-law, Charlie Riffle. Family and friends may call at the Carpenter and Ford Funeral Home, 209 Merchant Street, Fairmont, on Friday from 1-8 pm and on Saturday from 11 am - 1 pm. Funeral services will be held at the funeral home on Saturday October 16, 2010 at 1 pm with Pastor Tom Shepherd officiating. Interment will follow at Beverly Hills Memorial Gardens in Morgantown. The family would like to extend special thanks to Amedisys Home Health Care of Anmoore for their great care and requests that donations be made in Dottie's memory to Amedisys Home Health Care, 67 Casino Dr., Anmoore, WV 26323 Online condolences may be sent to the family at www.carpenterandford.com

The family of Dolris "Dottie" Layman created this Life Tributes page to make it easy to share your memories.