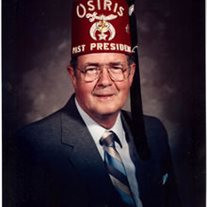 Denzil Summers Denzil Rufus Summers, 81, of Fairmont, Pinch Gut Hollow Road, passed away on Thursday, June 17, 2010 while playing golf at White Day Golf Course. He was born in Marion County on October 16, 1928 a son of the late Dennis Summers and Mary (Bee) Summers formerly of Grafton. Mr. Summers retired from Westinghouse/ North American Philips in January of 1989 where he worked in the maintenance department. Denzil was an active member of the Gateway United Methodist Church. He was an active member of the Masonic Acacia Lodge #157 of Fairmont. He was also a member of the Upper Monongahela Valley Shrine Club, Osiris Temple of Wheeling, the Morgantown Shrine Club and the Taylor County Shrine Clowns. Denzil proudly served his country with the United States Army in the 517th Engineering Company with service in Italy. He was a member of the VFW Post 629 in Fairmont. Denzil married Elizabeth Ann (Stemple) Summers on September 3, 1950, they would be celebrating their 60th anniversary this coming September. He leaves behind two sons and their wives, Denzil A. “Butch” Summers and his wife Sarah and Terry R. Summers and his wife Jodie all of Pinch Gut Hollow. He is also survived by his brothers-in-law and Sisters-in-law, Fred and Connie Poling of Fairmont, Jerry Stemple of York, Pennsylvania and Thomas and Janice Stemple of Ripley; many nieces and nephews, who loved him dearly; a favorite Aunt Icie of Harrisville, whom he corresponded with weekly. She always loved to fix him squirrel and gravy when he would visit her. In Denzil’s early years when his sons were small he helped coach Little league and helped with the Cub Scouts. Terry will miss his Dad’s daily walk to the garage to check to see what he was working on that day and his progress from the day before. Butch will miss checking on his Dad daily also and going with him to get parts for Terry. Denzil enjoyed life to the fullest every day, especially NASCAR racing, walking daily at the Mall and squirrel hunting in the Fall. He was especially fond of his grand-dog Sadie. He will be missed by all who knew him and will be remembered for his gentle way, his kindness and a little smile with some “wit” added. In addition to his parents, he was preceded in death by his brother, Charles Summers and his sister, Shirley Summers Auvil formerly of Grafton. Friends may call at the Carpenter and Ford Funeral Home, 209 Merchant Street, on Sunday from 1-9 p.m. and Monday from 10 -11 a.m. Chapter #34 Order of the Eastern Star will conduct a Ritualistic Service at 6pm on Sunday at the funeral home. Funeral services will be held at the funeral home on Monday, June 21, 2010 at 11:00 a.m. with Pastor Peggy Petrich and Pastor Jim Zinn officiating. Burial will follow at Grandview Memorial Gardens. Full Military Honors will be conducted by the Taylor County Veterans Council Honor Guard at the Cemetery. Grave Side Masonic Rites will be conducted by the Acacia Lodge No. 157. Memorial Contributions may be made to the Shriners Hospital for Children, 1645 West 8th Street, Erie PA 16505 Condolences may be left for the Denzil Summers Family at www.carpenterandford.com

The family of Denzil R Summers created this Life Tributes page to make it easy to share your memories.