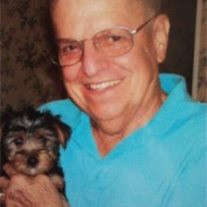 Denward Satterfiield, Jr. Denward Satterfield, Jr., Owner of Satties Gunshop, went to be with his Lord, at Shadyside Hospital in Pittsburgh on Thursday, November 18, 2010. He was 80 years old. He was born on July 1, 1930 in Fairmont a son of the late, Denward “Whitie” Satterfield and Dolly Iman (Satterfield) Clayton. Mr. Satterfield was a graduate of East Fairmont High School. He retired from the Monongahela Power Company in 1985 after 33 years of service. He remained active with his gun shop business until recently. He was an avid sportsman and fisherman. He loved being with his family. Denward was a devoted member of the Pleasant Valley Church of Christ. He is survived by his loving and devoted wife, Joyce (Watson) Satterfield; three children, his son, Gary Douglas Satterfield and his wife Juanita of Fairmont; his daughters, Sharletta “Punkin” Stevenski and her husband Chuck of Grafton and Tracy Heiskell of Kingmont; a step son, Jeff Fluharty and his wife Lisa of Fairmont; 14 very special grandchildren, Eric Satterfield, Brian Satterfield, Aaron Satterfield, Tiffany Stevenski, Andy Stevenski, Adam Stevenski, Ryan Heiskell, Levi and Corey Fluharty, Brian Bennett, Ashley Knoll, Jessie Knoll, and Brandon Tait and six wonderful great grandchildren, Autum Satterfield,, Brayden Satterfield, Garrett Satterfield, Aden Satterfield, Maddison Satterfield, Austin Stevenski, and Bonnie Tait; as well as special friends, Charlie Burris and John Miller. In addition to his parents, he was preceded in death by a daughter Kathy Ann Satterfield and several aunts and uncles. Friends may call at the Carpenter & Ford Funeral Home, 209 Merchant Street, on Saturday from 1pm to 9pm and Sunday Noon to 2pm. The funeral service will be at 2pm on Sunday, November 21, 2010 at the funeral home with Evangelist Earl P. Stevens officiating. Grave side services will follow at the Pisgah Cemetery on Route 73 North with Evangelist Norman Floyd officiating. Online condolences may be left for the family at www.carpenterandford.com

Denward Satterfiield, Jr. Denward Satterfield, Jr., Owner of Satties Gunshop, went to be with his Lord, at Shadyside Hospital in Pittsburgh on Thursday, November 18, 2010. He was 80 years old. He was born on July 1, 1930 in Fairmont a son... View Obituary & Service Information

The family of Denward Satterfield, Jr. created this Life Tributes page to make it easy to share your memories.