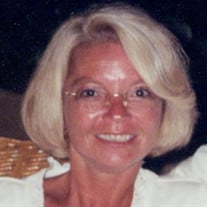 Debra Elaine Basnett, 62, of Worthington, passed away on Wednesday, December 11, 2019, after her third battle with cancer, with her family by her side. She was born on May 29, 1957, in Fairmont, a daughter of the late Frank and Della (Rosser) Rutherford. After graduating Monongah High School, Debra went on to proudly serve her country in the United States Army, where she was stationed in Korea. She later received an Associate’s Degree from Fairmont State University. She worked many customer service jobs and was a wonderful caregiver to her parents and grandparents until their passing. She will be remembered for her love of boating and spending time on the river, knitting, and visiting her grandchildren and the Caribbean, but most of all, for her love of family and friends. She is survived by her loving husband of 39 years, Michael A. Basnett. The couple met in junior high and fell in love and married on April 12,1980. She is also survived by son, Todd Basnett and wife Tiffany, of Colorado; brother, Frank J. Rutherford III and wife Kelly, of Swisher Hill; sister, Linda David, of Farmington; grandchildren: River Basnett, Remington Basnett, and Ridge Basnett, of Colorado; brothers-in-law, Carlton Basnett and wife Pam, of Fairmont, Tom Basnett and wife Vicki, of Lumberport, Dennis Basnett and wife Judy, of Katy, and Jack Basnett, of Colorado; mother-in-law, Doris J. Basnett, of Worthington; as well as many loving nieces and nephews. In addition to her parents, she was preceded in death by grandparents: Frank and Sylvia Rutherford, and Charles and Lenore Rosser; brother-in-law, Michael “Modi” David; and father-in-law, Roy Basnett. Family and friends are welcome to call at Carpenter and Ford Funeral Home, 209 Merchant St., Fairmont, on Saturday, December 28, 2019 from 11:00 a.m. until the memorial service at 1:00 p.m., at the funeral home, with Kevin Haugh officiating.

Debra Elaine Basnett, 62, of Worthington, passed away on Wednesday, December 11, 2019, after her third battle with cancer, with her family by her side. She was born on May 29, 1957, in Fairmont, a daughter of the late Frank and Della (Rosser)... View Obituary & Service Information

The family of Debra Elaine Basnett created this Life Tributes page to make it easy to share your memories.

Debra Elaine Basnett, 62, of Worthington, passed away on Wednesday,...