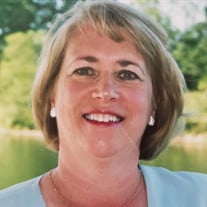 Debbie Elaine Droppleman, affectionately known as “DD”, of Fairmont, passed away at her home on Saturday, July 14, 2018, surrounded by her loving family. She was born in Fairmont on August 15, 1951, the daughter of the late Edgar “Bugs” Henderson and Martha (Swisher) Henderson. Debbie was a graduate of Fairmont Senior High School and West Virginia University, where she earned a Bachelor’s Degree in Accounting. On December 21, 1972, she married her high school sweetheart Chris Droppleman, who preceded her in death on December 29, 2016. Debbie was a dedicated and loyal employee of the Fairmont Federal Credit Union for over 37 years. She finished her career as the CFO. She considered her coworkers family and cherished their friendships, and continual support. Debbie, after being a breast cancer survivor, wanted to “pay it forward”. With the help of a group of dedicated coworkers, they started a non-profit organization called Robes for Recovery, which has donated over 1,100 robes to local hospitals that provide dignity and comfort to newly diagnosed patients as they receive radiation to fight their illness. Her legacy will live on not only in West Virginia but has touched the lives of many in various other states. She had also worked hand-in-hand with her mother Martha in multiple family businesses, which included Universal Closures, and Triad Business Services, where they provided bookkeeping and tax services for businesses and individuals until 2001. She truly enjoyed spending time with her family, and supporting them in their various activities and endeavors, including her grandson, Garrett, in GNCC races, her granddaughter, Jocelyn, in her F.A.S.T. swim meets, and her other grandson, Cameron, with his passion as a chef. She is survived by her son Gunner Droppleman, and wife, Jennifer, of Fairmont, and three grandchildren, Garrett Droppleman, Jocelyn Droppleman, and Cameron Lawson. Debbie is also survived by sister-in-law Terry McKiernan, and husband, Tom, of Stamford, Connecticut; and brother-in-law, Pat Droppleman, and wife, Denise, of Chicago, Illinois; as well as their children and grandchildren. She is also survived by caring family members Susie Woods, and husband Glenn, of Alta Loma, California; Paul Swisher of Fairmont, Mike Swisher, and wife, Lori, of Canonsburg, Pennsylvania; and John Swisher, and wife, Kim, of Kernersville, North Carolina, and their children. Debbie was truly a selfless individual who put others first. She was a beloved daughter, wife, mother, grandmother, friend, coworker, and mentor to many. She touched many lives directly and indirectly by her intentional kindness. As per her wishes, in lieu of flowers, memorial contributions may be made to Robes for Recovery, c/o any Fairmont Federal Credit Union office, or mailed to Fairmont FCU, P.O. Box 2139, Fairmont, West Virginia 26555. Debbie and her family would like to thank the volunteers and seamstresses at Robes for Recovery, whose time and dedication will help Debbie’s legacy live on. If you would like more information about Robes for Recovery, visit their Facebook page, or please contact Cindy Dickey, a Robes for Recovery Committee member with Fairmont Federal Credit Union.

Debbie Elaine Droppleman, affectionately known as &#8220;DD&#8221;, of Fairmont, passed away at her home on Saturday, July 14, 2018, surrounded by her loving family. She was born in Fairmont on August 15, 1951, the daughter of the late Edgar... View Obituary & Service Information

The family of Debbie Elaine Droppleman created this Life Tributes page to make it easy to share your memories.