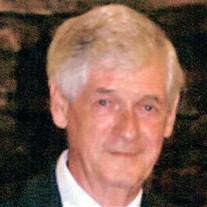 David Hugh Graham, 76, of Boothsville Community, passed away on Thursday, October 18, 2018 after fighting a courageous battle with cancer. Dave was born in Albright on April 30, 1942. Dave served his country in the United States Army during the Vietnam War as a Specialist 4th Class, supervising the receiving and issuance of ammunition. He was the manager of the Middletown Mall from 1970 to 1983 and a Regional Mall Manager for Crown American Corporation until 1998. He retired as a Facilities Manager at Teletec. He leaves behind his loving wife of 53 years, Carolyn (Fizer) Graham; his most valued things while here on earth, his three children and their spouses of which he was so proud: Shawn (Robin) Graham, of Flemington, Stephanie (Herman) Sims, of Fairmont, and Julie (Evan) Worthington, of Idaho; and six precious grandchildren: Jordan Elise Graham, of Fairmont; Savannah Graham Sims, of Fairmont; Shawna Anne Graham, of Flemington; Hunter Bay Sims, of Fairmont; Avery Graham Worthington, of Idaho; and Sophia “Wren” Worthington, of Idaho. Dave is also survived by two sisters, Sandy Miller of Monongah, the quiet one; and Linda “Sue” Sayer of Ravenswood, the crazy, ornery one. He was preceded in death by his grandparents, who raised him, Martha Vola Graham and Cloyd Graham; and his mother, Marvel (Graham) Krygielka. Friends and family will be received on Sunday, October 21, 2018 at Carpenter and Ford Funeral Home, 209 Merchant Street, Fairmont, from 11am to 8pm to celebrate Dave’s life. A service will be held at 3:30 p.m. with Full Military Honors provided by the Marion County Veterans Council Honor Guard and United States Army Reserves from Camp Dawson.

David Hugh Graham, 76, of Boothsville Community, passed away on Thursday, October 18, 2018 after fighting a courageous battle with cancer. Dave was born in Albright on April 30, 1942. Dave served his country in the United States Army during... View Obituary & Service Information

The family of David Hugh Graham created this Life Tributes page to make it easy to share your memories.