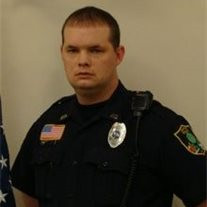 Daniel C. Laymon III Daniel C. Laymon, III, 31, of Fairmont, Benton’s Ferry Community, passed away on Tuesday, October 20, 2009 at Ruby Memorial Hospital in Morgantown. He was born on April 18, 1978 in Ilion, New York, a son of the late Daniel C. Laymon, Jr. and Nora Schuyler Liddle and his step-father David Liddle of Jordanville, New York. Mr. Laymon proudly served his country in the United States Army and the Army National Guard 201st Infantry F/A from 1997-2005. He completed tours in both Korea and Iraq. He was employed as a police officer with the Grafton City Police Department for over three years. Daniel was a member of the Grafton-Taylor County Special Response Team and the Monongalia, Grafton-Taylor County Dive/Water Rescue Team. He was a member of the Fraternal Order of the Police. Daniel loved the brotherhood of law enforcement. He also enjoyed hunting, fishing and sports and was an Eagle Scout. Daniel attended the Fairmont Free Methodist Church. He was a graduate of the Ilion Senior High School in New York. In addition to his mother and step-father, he is survived by his loving wife Jessica Sullivan Laymon and their daughter Makenna Grace Laymon, both of Benton’s Ferry Community; his aunt and uncle who raised him, Bill and Phyllis Laymon of Malone, New York his brothers Joe Laymon of Little Falls, New York and Bill Laymon, Jr. and his wife Annie of Arizona; his sisters Corrine King of Jordanville, New York and Bridget Yaw and her husband Chris of Malone, New York; his mother-in-law Kathy Vincent of Fairmont; brothers-in-law Adam Murphy of Fort Knox, Kentucky, Morgan Murphy of Fairmont and Pat Murphy of Fairmont; and several nieces, nephews and close family members and friends. Friends and family may call at Carpenter and Ford Funeral Home, 209 Merchant Street, Fairmont on Saturday from 5:00pm to 8:00pm and Sunday from 1:00pm to 8:00pm. Services will be held at the funeral home on Monday, October 26, 2009 at 11:00am with Reverend Carl Radcliff officiating. Interment will immediately follow at the West Virginia National Cemetery in Pruntytown. Full military honors will be conducted by the VFW Post 3081, the American Legion Post 12 of Taylor County, the DAV Chapter of Grafton and the West Virginia National Guard, Camp Dawson. A Memorial Service will be held on Saturday, October 31, 2009 at Word Christian Center, 27 East Min Street, Mohawk, NY 13407. In leu of flower donations may be made to offset medical expenses. Send donations to Word Christian Center, c/o Dan’s Fund at 27 East Min Street, Mohawk, NY 13407. Online condolences may be sent to the Laymon Family at www.carpenterandford.com.

The family of Daniel C Laymon III created this Life Tributes page to make it easy to share your memories.