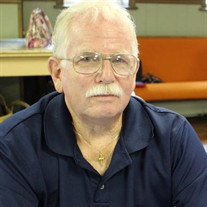 Daniel Glenn Brown, of Fairmont, passed away at his home on his 78th birthday on October 9, 2020. He was born in Fairmont in 1942 to R. Glen and Ruth Elizabeth (Loutsenhizer) Brown. After graduating from Fairmont Senior High School and Fairmont State College, Dan worked and retired from the FCI Morgantown (Kennedy Center Federal Correctional Institute). There he was an Educational Instructor and served as the Assistant Supervisor of Education. He and wife Shirley became ordained ministers and co-pastored Hebron Baptist Church for 12 years. In retirement Dan always stayed busy. For several years he worked at the Fairmont H&R Block during tax season. He loved operating “Dan’s Sewing Machine Repair Service” and quilting business until he was no longer able to do so due to his health. Dan was the founder of the North Central WV Emmaus Community. He served in multiple positions and on many Emmaus, Chrysalis, and Kairos teams here and in the Eastern Panhandle. In life, Dan loved baking, hunting, working on cars, gardening, playing the banjo, and woodworking. He enjoyed camping at the beach with his family. He was a devout man of God, as well as a loving husband and father. He was actively involved in church life, singing in the choir, leading Bible study, and teaching Sunday School. He enjoyed helping family, friends, and neighbors. Dan is survived by his wife of 55 years, Shirley (Stansberry) Brown. He is also survived by his children and their spouses, Kari and Jeff Price, of Fairmont, and Kolin and Stephanie Brown, of Fairmont; his grandchildren: Melissa Price, Jeffrey Price, and Kyle Brown; and his brother, John Brown and wife Elizabeth, of Charles Town. In addition to his parents he was proceeded in death by his brother, James Brown. The family would like to thank the wonderful nurses and aides from Amedisys and his angel Hannah for their care and support. In keeping with his wishes, cremation will take place. A graveside service for the family will be held in the future. In lieu of flowers, memorial contributions may be made to North Central West Virginia Emmaus, PO Box 83, Fairmont, WV 26554, or [email protected]

Daniel Glenn Brown, of Fairmont, passed away at his home on his 78th birthday on October 9, 2020. He was born in Fairmont in 1942 to R. Glen and Ruth Elizabeth (Loutsenhizer) Brown. After graduating from Fairmont Senior High School and Fairmont... View Obituary & Service Information

The family of Daniel Glenn Brown created this Life Tributes page to make it easy to share your memories.

Daniel Glenn Brown, of Fairmont, passed away at his home on his...