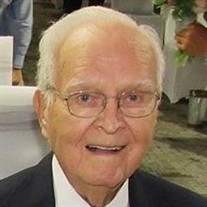 Dallas Russell Boyers, 93, of Fairmont passed away on Saturday, August 25, 2018 at his home. He was born in Fairmont on February 8, 1925 a son of the late Lawrence Luther and Della Jenkins Boyers. He is survived by his devoted wife of 72 years, Elaine Schleicher Boyers. The couple were married on July 9, 1946 at St. Peters Catholic Church in Fairmont. Dallas is the retired owner of Boyers Equipment Company, which later became Middletown Tractor Sales. Mr. Boyers started the business in Mannington selling feed and tractors. He also assisted in the development of Rainbow Plaza. Mr. Boyers proudly served his country in The United States Marine Corps during WW II in the South Pacific, Hawaii, and China. He was an active member of St. Peter the Fisherman Roman Catholic Church. He was also active in numerous organizations, including 3rd Degree member of the Knights of Columbus, Marian Council #94 and Past Faithful Navigator, with memberships in the Lions Club, the Fairmont Elks Lodge #294, and the Loyal Order of the Moose. He and his wife liked to travel, visiting many places around the world. In addition to his wife, Dallas is survived by two sons, Gary Boyers and his wife Cassie, of Fairmont and James “Jim” Boyers and his wife Liz, of Fairmont; three grandchildren and their spouses, Amy (Matt) Hughey, Shawn ( Denise) Boyers and Adam (Cortney) Boyers; a grandson-in-law, Zach Marsh; and great grandchildren, Blake Boyers, Maddox Boyers, Nathaniel Boyers, Connor Boyers, Ryan Hughey, Charlotte Hughey, Gracyn Marsh, and Lucas Marsh. Also surviving is his sister, Clara Wamsley, of Maryland, and several nieces and nephews. In addition to his parents, he was preceded in death by a daughter-in-law, Betty L. Boyers; a granddaughter, Adrianne Rachelle Marsh; three brothers, Bernard Boyers, Ray Boyers, and Leonard Boyers; and two sisters, Rose Williams and Nell Poling. The family will receive friends at the Carpenter & Ford Funeral Home, 209 Merchant Street, Fairmont, on Monday from 5 p.m. to 8 p.m., and on Tuesday from 10am to 11am. The funeral service will be a 11:00 a.m. on Tuesday, August 28, 2018 at the funeral home with Father Joseph Konikattil officiating. Committal services will follow at View Point Cemetery in Rachel with Full Military Honors provided by the Marion County Veterans Council Military Honor Guard. In lieu of flowers, the family requests that donations be made to: American Heart Association Inc., P.O. Box 15120 Chicago, Illinois 60693; Marion County Rescue Squad, 400 Virginia Ave. Fairmont, WV 26554; and the Marion County Humane Society, P.O. Box 905 Fairmont, WV 26554.

Dallas Russell Boyers, 93, of Fairmont passed away on Saturday, August 25, 2018 at his home. He was born in Fairmont on February 8, 1925 a son of the late Lawrence Luther and Della Jenkins Boyers. He is survived by his devoted wife of 72... View Obituary & Service Information

The family of Dallas Russell Boyers created this Life Tributes page to make it easy to share your memories.

Dallas Russell Boyers, 93, of Fairmont passed away on Saturday,...