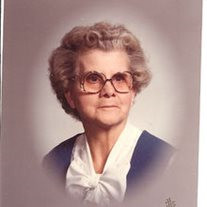 Cora Poling Cora Marie Hawkins Poling, 95, of Fairmont passed away on Wednesday, December 2, 2009 at the Hospice Inpatient Unit at Elkins. She was born at Grassy Run in Marion County on September 5, 1914 a daughter of the late William Hawkins and Anna Elizabeth Huffman Hawkins. Mrs. Poling worked as a custodian at East Park School for 9years. Prior to that she worked as a home health care provider. She was a more than thirty year member of the Christian Missionary Alliance Church on East Park Avenue. Cora enjoyed ceramics, quilting, crochet, sewing, growing flowers and various crafts. She loved and respected her family and friends. She is survived by a son and daughter-in-law, Adrian Richard and Edna Poling of Waynesboro, Pennsylvania; her daughter and caregiver with whom she made her home, Martha Ann Poling of Fairmont; two sisters, Olive Rebecca Coffman of Sutton and Nina Shaw of Fairmont; two grandchildren and their spouses, Ricky Lee and Pam Poling of New York and Sheryl and Rick Gudgeon of Pennsylvania; nine great grandchildren and several nieces, nephews and cousins. In addition to her parents, she was preceded in death by two sons in infancy; two brothers, Lloyd Hawkins and Glen Hawkins and six sisters, Rosa Pride, Goldie VanGilder, Martha Hayhurst, Dessie Lake, Mary Pride and Louanna VanGilder. Friends and family may call at the Carpenter & Ford Funeral Home, 209 Merchant Street on Friday from 1pm to 8pm and Saturday 11am to 1pm. The funeral service will be at 1pm on Saturday, December 5, 2009 at the funeral home with Pastor Larry Hissam officiating. Interment services will follow at Mt. Zion Cemetery. Memorial contributions may be made to Christian Mission Alliance Church, 801 East Park Avenue, Fairmont, WV 26554 or Hospice Care, 1408 Country Club Road, Fairmont, WV 26554. Online condolences may be sent to the Poling Family at carpenterandford.com.

Cora Poling Cora Marie Hawkins Poling, 95, of Fairmont passed away on Wednesday, December 2, 2009 at the Hospice Inpatient Unit at Elkins. She was born at Grassy Run in Marion County on September 5, 1914 a daughter of the late William Hawkins... View Obituary & Service Information

The family of Cora Marie Poling created this Life Tributes page to make it easy to share your memories.