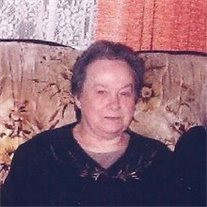 Cleo Jean Hoskinson Duskey, 79, of Fairmont, died on Thursday, October 15, 2009 at Fairmont General Hospital. She was born on July 18, 1930 in Fairmont a daughter of the late Robert Leonard Hoskinson and Bertha Virginia Boyles Hoskinson. She was preceded by her husband of 38 years, Guy Robert Duskey, Jr., who passed away on August 1, 1994. Cleo was a graduate of East Fairmont High School. She was a homemaker, a mother and a grandmother. She had been employed with Walmart, C&P Telephone and Ames. Cleo enjoyed working puzzles and playing Nintendo. She loved spending time with her children and her grandchildren. Cleo was Catholic by faith. She is survived by her daughters Linda Hamilton and her companion Kevin Vanhorn of Fairmont, Jody Duskey of Fairmont, Carol Duskey of Fairmont, Donna Davis-Duskey of Monongah; her former sons-in-law Steve Hamilton of Fairview, Ritchie Davis of Fairmont and Tom Pierce of Monongah; her brother James Hoskinson and his wife Maggie of Farmington; her sisters Josephine Hoskinson of Fairmont, Betty Skarzinski and her husband Stanley of Fairmont, Billie Melton and her husband Elwood of Fairmont and Dorothy McElfresh and her husband Truman of Fairmont; her sister-in-law Jeanette Hoskinson; her grandchildren Michael Hamilton and his wife Darla of Fairmont, David Duskey of Fairmont, Sara Davis of Monongah, Samantha Davis of Monongah and Dylan Davis of Monongah and several nieces and nephews. In addition to her parents and her husband, she was preceded in death by her daughter Nancy L. Duskey, her sister Judy L. Wilfong, her brother Robert Hoskinson, Jr., and her brother-in-law Bruce Wilfong. Friends and family may call at Carpenter and Ford Funeral Home, 209 Merchant Street, Fairmont on Saturday from 1:00pm to 4:00pm, Sunday from 6:00pm to 9:00pm and on Monday from 10:00am to 11:00am. Services will be held at the funeral home on Monday, October 19, 2009 at 11:00am with Pastor Frank Cosco officiating. Interment will immediately follow at Grandview Memorial Gardens.

Cleo Jean Hoskinson Duskey, 79, of Fairmont, died on Thursday, October 15, 2009 at Fairmont General Hospital. She was born on July 18, 1930 in Fairmont a daughter of the late Robert Leonard Hoskinson and Bertha Virginia Boyles Hoskinson. She... View Obituary & Service Information

The family of Cleo Jean Duskey created this Life Tributes page to make it easy to share your memories.