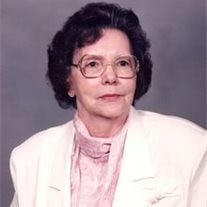 Clara Chapple Clara Virginia Chapple, 87, of Rivesville passed away on Sunday, August 30, 2009 at Fairmont General Hospital surrounded by her family. She was born in Monongah on December 28, 1921 one of nine children born to the late James “Monk” Carpenter and Dora Mae Shupp Carpenter. She was preceded in death by her beloved husband Carl William Chapple in 1954. Mrs. Chapple retired as manager of the Fashion Bug at the Middletown Mall. Prior to that she was manager of Ormonds Shop in Downtown Fairmont. She had also worked at Lipson’s Jewelers. She graduated from the West Virginia Business College. She was a member of the Highlawn United Methodist Church and the Order of the Eastern Star, Fairmont Chapter #34. Clara was avid sports fan, especially the Pittsburgh Steelers and West Virginia University sports. Clara had a full life, was a devoted homemaker, loving mother and loving grandmother. She was especially proud of her large family. She enjoyed her work, meeting and serving the public. She is survived by her sons, Carl W. Chapple, Jr. and his wife Roberta Paulette of Barrackville and Pastor Richard D. Chapple and his wife Josielea of Pine Grove; a brother, Victor Carpenter and his wife Elizabeth of West Palm Beach, Florida; three sisters Betty Gantle of Point Marion, Pennsylvania, Shirley Clelland and her husband Herb of Fairview and Sally Westfall and her husband Cecil of Minerva, Ohio; her very special grandchildren and their spouses, Carlena Jo Chapple-Brooks and her husband Bill of Mont Clair, Virginia, Jennifer Lynn Huey and her husband Mike of Mannington, Melanee Morgan and her husband Paul of Fairmont, Richard D. Chapple, Jr. and his wife Joanne of Pine Grove and Jayne’ Chapple-Kirk and her husband Randy of Morgantown; ten great grandchildren and three great great grandchildren. In addition to her parents and husband, she was preceded in death by three sisters, Mary McNunis, Matilda Ash and Doris Gorby and a brother, Earnest Lee Carpenter. Friends may call at the Carpenter & Ford Funeral Home, 209 Merchant Street on Tuesday from 1pm to 8pm and Wednesday 10am to 11am. Chapter #34 Order of the Eastern Star will conduct a Ritualistic Service at the Funeral Home at 7:00pm on Tuesday. The funeral service will be at 11am on Wednesday, September 2, 2009 at the funeral home with Pastor Richard D. Chapple officiating. Interment services will follow at Beverly Hills Memorial Gardens. Clara’s family would like to extend their appreciation to the Special Care Unit at Fairmont General Hospital for their excellent care and compassion.

Clara Chapple Clara Virginia Chapple, 87, of Rivesville passed away on Sunday, August 30, 2009 at Fairmont General Hospital surrounded by her family. She was born in Monongah on December 28, 1921 one of nine children born to the late James... View Obituary & Service Information

The family of Clara Virginia Chapple created this Life Tributes page to make it easy to share your memories.