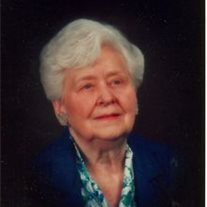 Charlotte Hughes Charlotte Willis Hughes of Keyser, formerly of Fairmont passed away on Wednesday, December 23, 2009 at Potomac Valley Hospital in Keyser. She was born in Fairmont on April 29, 1917 a daughter of the late Loftis Willis and Mattie Patton. Charlotte married Thomas A. Hughes on March 30th 1946 in Stephenson, Virginia. Tom passed away on January 21, 1998. The couple celebrated their 50th wedding anniversary on March 30, 1996. She graduated from East Fairmont High School in 1935. She had worked at both Hartley’s and Jones Department Stores in Fairmont. She retired in May of 1979 from the finance department with the City of Fairmont. Charlotte had been a member of the Diamond Temple United Methodist Church/ Gateway United Methodist Church, the Win-One Sunday School Class and a member-at-large of the Diamond Temple United Methodist Women and the East - West Homemakers. She was most recently a member of the Grace United Methodist Church in Keyser. Survivors include her son, Thomas (Mike) Hughes, a retired teacher from Keyser High School, of Keyser; a grandson, Jerry and his wife Lisa Hughes of Keyser; a grand daughter-in-law, Melissa Hughes of St. Michaels, Maryland; five great grandchildren, Kesha Hughes, Joshua, Hughes, Derek Hughes, Matthew Hughes and Hanna Hughes and a great great grandchild, Bailee Rae Hughes and several cousins including, Anna Lee Cain, Nancy Lee Thompson, Stanley W. “Bill” Harris and Linda Lee Pender. In addition to her parents and husband, Charlotte was preceded in death by her brothers, Clifford Willis and Carl Willis , who died in infancy and a grandson, Roger Hughes, passed away in 2001. Friends may call at the Carpenter & Ford Funeral Home, 209 Merchant Street, Fairmont on Monday from 6pm to 8pm and Tuesday 11am to 1pm. The funeral service will be at 1pm on Tuesday, December 29, 2009 at the funeral home with Rev. Peggy Petrich officiating. Interment services will follow at Grandview Memorial Gardens. In lieu of flowers, memorial contributions may be made to the Gateway United Methodist Church, 301 Diamond Street, Fairmont or Grace United Methodist Church, 30 South Mineral Street, Keyser, WV 26726. Condolences may be sent to the Hughes Family at www.carpenterandford.com.

Charlotte Hughes Charlotte Willis Hughes of Keyser, formerly of Fairmont passed away on Wednesday, December 23, 2009 at Potomac Valley Hospital in Keyser. She was born in Fairmont on April 29, 1917 a daughter of the late Loftis Willis and... View Obituary & Service Information

The family of Charlotte Hughes created this Life Tributes page to make it easy to share your memories.