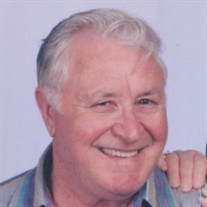 Charles Abran Tennant, fondly known by his family as Pappaw, 93, a longtime resident of Fairview, passed away on Tuesday, August 07, 2018 at Shadyside Care Center in Shadyside, Ohio. Charles lived with his daughter for the past five years in Moundsville. He was born in Fairview on April 06, 1925, the son of the late Charles D. and Lottie V. Tennant. In July 1943, at the age of 18, Charles was drafted into the Army Air Force to serve his country in the 5th Air Force and was honorably discharged in February 1946. During World War II Charles served in New Guinea, the Philippines, Okinawa, and Tokyo. He went Missing in Action during the Liberation of the Philippines in 1945. Corporal Tennant earned five Battle Stars for his service in the 5th Air Force, seven Campaign Ribbons in the 35th Fighter Control Squadron, and a World War II Victory Medal. After the service, he returned to Fairview High School to finish his education and graduated in 1947. Charles later went to school in Pittsburgh for refrigeration and air conditioning repair on the G.I. Bill. He worked for the Eastern Associated Coal Corporation for 37 years as an electrician and a mechanic. He was a member of U M W of A Local 4047 of Grant Town. He had also been employed as a refrigeration and air conditioning mechanic in Florida, Ohio, Pennsylvania, Virginia, and West Virginia. He was a member of the Cross Roads Community Chapel, where he was baptized on August 18, 1974. Charles will be remembered for his love of photography, dogs, the outdoors, writing stories, and his patriotism. In addition to his parents, he was preceded in death on November 07, 2017 by his loving wife of 67 years, Mary Marguerite (Toothman) Tennant. He was also preceded in death by a brother, George Clark Watson. Charles is survived by son, Joe Tennant and wife Gladys, of Florida, and daughter, Donna Turner and husband Francis, of Moundsville, and brother, Bernard Rex Tennant and wife Mary Ann, of Fairmont. Charles is also survived by six grandchildren, Melissa Rzepczynski and husband Kris, of Michigan; Crystal Moore and husband Luke, of Morgantown; Jo Ann Sanders, of Florida; Wendy Jo Vavrek and husband Adam, of Ohio; John Tennant, of Florida; and Jason Turner and wife Tiffany, of Moundsville, and six great-grandchildren, Zurina Santiago, Cheyenne Sanders, Maggie Turner, Katie Moore, Emma Rzepczynski, and Isabel Rzepczynski, as well as many loving nieces and nephews. Friend and family may call at Carpenter and Ford Funeral Home, 209 Merchant Street, Fairmont on Sunday, August 12, 2018 from 1 p.m. to 8p.m., and Monday August 13th, from 9 a.m. to 11 a.m. Services will take place on Monday at 11:00 a.m. at the funeral home with Reverend Delas Stuzen officiating. Interment will follow at Fairview Cemetery with Full Military Honors conducted by the Marion County Veterans Council Honor Guard and the Joint Base Andrews Honor Guard.

Charles Abran Tennant, fondly known by his family as Pappaw, 93, a longtime resident of Fairview, passed away on Tuesday, August 07, 2018 at Shadyside Care Center in Shadyside, Ohio. Charles lived with his daughter for the past five years in... View Obituary & Service Information

The family of Charles Abran Tennant created this Life Tributes page to make it easy to share your memories.

Charles Abran Tennant, fondly known by his family as Pappaw,...