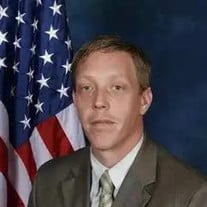 Chad Austin Heck, 44, of Fairmont, passed away at his home on Thursday, July 25, 2019. He was born on February 05, 1975, in Alexandria, Virginia, a son of Edward Heck and Lila (Conley) Heck, of Fairmont. After graduating North Side High School in Roanoke, Virginia, and attending college, Chad went on to proudly serve his country in the United States Navy aboard the USS Stout. Chad currently served on the security team at the CDC in Morgantown. He also served as a Lieutenant and Investigator in the Jackson County Mississippi Drug Task Force. He was selected by Jackson County and the Discovery Channel for the exclusive film and TV presentation of “Dixie Mafia”. He earned numerous citations and awards as a law enforcement officer and certified Search and Rescue Scuba Diver. Chad lost his home and car in 2005 to Hurricane Katrina and worked 60 days straight in Search and Recovery. Chad is survived by his daughter and the light of his life, Madison Alexis Heck. He is also survived by brothers, Ryan Heck and wife Doris, of Virginia, and Jared Heck, of Fairmont; grandmother, Frances Heck, of Pearisburg; nieces and nephews, Zoie Fisher, Walker Heck, and Dacotah Heck; special aunts, Katy Dunford and Peggy Wright, and special aunt and uncle, Eugene and Lissa Conley, of Fairmont. Chad was preceded in death by his mother, Christy (Timmons) Heck; grandfather, Aubin “A.B” “Jack” Heck; and grandmother, Mary S. “Granny Mary” Conley. Family and friends are welcome to call at Carpenter and Ford Funeral Home, 209 Merchant St., Fairmont, on Wednesday, July 31, 2019 from 10 a.m. – 2 p.m., with services starting at 2:00 p.m. at the funeral home, with Pastor Matt Holbert officiating. A Flag Folding ceremony will be performed at the funeral home by the United States Navy and the Marion County Veterans Honor Council. In keeping with the family’s wishes, Chad will be cremated following the service.

Chad Austin Heck, 44, of Fairmont, passed away at his home on Thursday, July 25, 2019. He was born on February 05, 1975, in Alexandria, Virginia, a son of Edward Heck and Lila (Conley) Heck, of Fairmont. After graduating North Side High School... View Obituary & Service Information

The family of Chad Austin Heck created this Life Tributes page to make it easy to share your memories.

Chad Austin Heck, 44, of Fairmont, passed away at his home on...