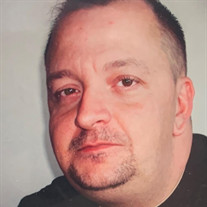 Cecil “Chub” Earnest Stewart, 50, of Fairmont, passed away on September 03, 2019, at Fairmont Regional Medical Center. He was born on July 15, 1969, in Fairmont, a son of Eleanor (Hiley) Stewart, of Fairmont, and the late Delmas Lee Stewart. After graduating high school, Chub went on to work as a Belt Supervisor at Gabriel Brothers. He will be remembered as a very talented drawer, as well as his love of tattoos, and the pride and joy of his life, his granddaughter, Emma. Chub is survived by his son, Dustin Cruz Stewart, of Fairmont; daughter, Chelsea Elizabeth Stewart, of Fairmont; brothers, Franklin Stewart and wife Jennifer, and Christopher Corwin, all of Fairmont; sister, Patricia Stewart and companion Kimberly White, of Fairmont; granddaughter, Emma Elizabeth Patrick; ex-wife, Jeana Heston King, of Fairmont; as well as seven nieces and nephews, eleven great nieces and nephews, and several aunts and uncles. In addition to his father, Chub was preceded in death by brothers, Robin Stewart and Michael Cale; and grandparents: Earnest and Mildred Hiley, and Cecil and Elizabeth Cross. In keeping with his wishes, Chub will be cremated, with a memorial service being held at a later date.

The family of Cecil Earnest "Chub" Stewart created this Life Tributes page to make it easy to share your memories.

Cecil “Chub” Earnest Stewart, 50, of Fairmont, passed away on...