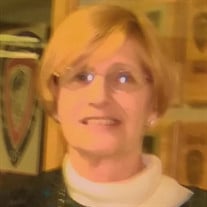 Bonnie Lou Weaver Preolette, 71, of Fairmont, passed away on Tuesday, June 1, 2021 at Tygart Center in Fairmont. Bonnie was born in Fairmont on December 28, 1949 to the late Charles H. and Delores Lauderback Weaver. She was a graduate of Fairmont Sr. High School and was employed at Westinghouse for several years. In 1980 she opened Preolette bakery in Monongah with her mother-in-law, Ann Preolette. They were famous for their pizza, pepperoni rolls, and holiday cookies. She also did catering for many events in Marion and surrounding counties. In later years, she was employed by Delinquent Solutions Inc. Bonnie was an avid reader and enjoyed playing games with family and friends. She was Church of Christ by faith and associated with the Norway Church of Christ. She was a talented crafter, quilter, and seamstress. She was an amazing cook and baker, and enjoyed spending time in the kitchen with her children and grandchildren, teaching them her many recipes. The happiest times in her life were spent being a grandma and making memories with her grandchildren. Along with her parents, bonnie is preceded in death by her husband Pat Preolette. Bonnie is survived by her son Frank Preolette and his wife Lora of Salisbury, NC, her daughter Mary Frances Wilson and her husband Lance of Fairmont, and her grandsons Alex Kennedy of Dayton, OH, and Vincent Preolette of Salisbury, NC. She is also survived by her sister Kathy DeVault and her husband Grady, brother Charles (Eddie) Weaver and his wife Jeannie, brother-in-law Mike Preolitti and his wife Irene, sister-in-law Coral Schrecengost and her husband Robert, and several neices, nephews, and cousins. Family and friends are welcome to call at Carpenter and Ford Funeral Home, 209 Merchant St., Fairmont, WV 26554 on Saturday, June 12, 2021 from 10:00 a.m. until the time of the memorial service at 11:00 a.m. with Pastor Bob Schrecengost officiating. Memorial contributions may be made to the West Virginia Christian Youth Camp online at www.wvcyc.com or mailed to 12 Columbine Dr., Lost Creek, WV 26385.

Bonnie Lou Weaver Preolette, 71, of Fairmont, passed away on Tuesday, June 1, 2021 at Tygart Center in Fairmont. Bonnie was born in Fairmont on December 28, 1949 to the late Charles H. and Delores Lauderback Weaver. She was a graduate of Fairmont... View Obituary & Service Information

The family of Bonnie Lou Preolette created this Life Tributes page to make it easy to share your memories.

Bonnie Lou Weaver Preolette, 71, of Fairmont, passed away on...