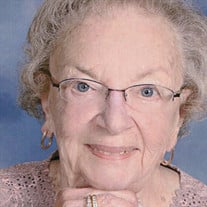 Beverly Anne (Baker) Davis, 85, of Fairmont, passed away on Friday, September 13, 2019 at her home surrounded by her family. She was born on April 2, 1934, the daughter of the late Wilma Baker Yost. She was raised in the home of her grandparents, Dama and Bert Baker. She married Ronald O. Davis in 1953 and together they raised three children: Janet “Jan” Smith, Steven (Charlotte) Davis, and Anne (James) Long. She was the proud grandmother of Matthew (Brittany) Smith, Bradley (Melissa) Smith, Amanda (Cecil) Beam, Laura (Jason) Tawzer, Steven (April) Davis, Zachary (Christen) Davis and Michael (Tatiana) Wright and step-grandson, Brandon (Aysha) Long. She also had 25 great-grandchildren and one great-great grandson. Also surviving are brothers-in-law, Dennis McGrath and Lawrence Davis; sisters-in-law Eileen (Manuel) Cardosa and Diane (Ty) Phillips; and a niece, Rebecca Dent Scott. In addition to her husband, mother, and grandparents, she was preceded in death by her sister, Peggy McGrath; stepfather, Mike Yost; parents-in-law James L. and Leona Davis; her aunt and uncle, James and Louise Hanway; and a great nephew, Sean Dent. Beverly was a graduate of East Fairmont High School. After raising her children, she earned a B.S. from Fairmont State University and worked in Social Services. She was a trainer in the Family and Infant Learning Program at Valley Mental Health. While living in Danbury, Connecticut, she supervised the Parent Aide program at Family and Children’s Aid. Locally, she was the first director of MVA Hospice and a counselor at HOPE Inc. Beverly was an active member of The Baptist Temple. She was an ordained deacon, co-chair and secretary of Brown-Davis Mission Circle, past secretary of AB Women’s Ministries, a member of the Carl Cain class, Saints Alive, and the Saints Alive Bible Study. She coordinated the church’s Operation Christmas Child program for many years. One of her favorite ways to serve others was through the church’s bereavement dinners as she knew they bring comfort to grieving families. Beverly was also a member of the NCWV Emmaus community, East Side monitor for Meals on Wheels, a charter member of Lifelong Learners, and a member of Winfield CEOs and NARFE. One of her favorite quotes from Mother Teresa describes her very well: “We can only do small things with great love.” Family and friends are welcome to call at Carpenter and Ford Funeral Home, 209 Merchant St., Fairmont, on Sunday from 1 p.m. – 8 p.m. and on Monday, September 16, 2019, from 11 a.m. until the Celebration of Her Life at 1:00 p.m. at the funeral home, with Pastor Allan Copenhaver and Dr. Holley Faulkner officiating. Interment will follow at Mt. Zion Cemetery.

Beverly Anne (Baker) Davis, 85, of Fairmont, passed away on Friday, September 13, 2019 at her home surrounded by her family. She was born on April 2, 1934, the daughter of the late Wilma Baker Yost. She was raised in the home of her grandparents,... View Obituary & Service Information

The family of Beverly Anne Davis created this Life Tributes page to make it easy to share your memories.

Beverly Anne (Baker) Davis, 85, of Fairmont, passed away on Friday,...