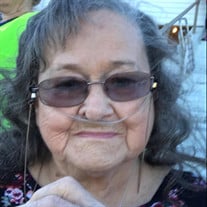 Betty Lou Skarzinski, 88, of Fairmont, passed away on Thursday, September 10, 2020, at United Hospital Center. She was born on April 12, 1932, in Fairmont, a daughter of the late Robert Leonard and Bertha Virginia (Boyles) Hoskinson. After graduating from East Fairmont High School, Betty worked at C&P Telephone Co. until the arrival of her second child, when she became a stay at home mother for several years. Afterwards, she worked as a cook and head cook at Fairmont Senior High School, where she retired. She was a loving mother, grandmother, great-grandmother, friend, and neighbor. At church, people would line up to receive hugs and kisses from her. She was a member of the APWU Women's Auxiliary, where she held many offices, including President. She was a devout member of the Seventh Day Adventist Church. Betty is survived by son, Stanley Skarzinski, of Mannington; daughter, Mary Skarzinski, of Fairmont; sister and brother-in-law, Dorothy and Junior McElfresh; sister-in-law, Maggie Hoskinson; granddaughter, Danielle Lenyee; five great-grandchildren; as well as several nieces and nephews, and great and great-great nieces and nephews. In addition to her parents, she was preceded in death by husband Stanley L. Skarzinski. She was also preceded in death by two brothers, five sisters, and grandson, Devin Pourbaix. In lieu of flowers, memorial contributions may be made to Carpenter and Ford Funeral Home to offset funeral expenses. Family and friends are welcome to call at Carpenter and Ford Funeral Home, 209 Merchant St., Fairmont, on Monday from 1 p.m. – 8 p.m. and on Tuesday, September 15, 2020, at Seventh Day Adventist Church, 9 Oakwood Rd., Fairmont, from 10 a.m. until the service at 11:00 a.m., at the church, with Pastor Abner Rodriguez officiating. Interment will follow at Holy Cross Cemetery.

Betty Lou Skarzinski, 88, of Fairmont, passed away on Thursday, September 10, 2020, at United Hospital Center. She was born on April 12, 1932, in Fairmont, a daughter of the late Robert Leonard and Bertha Virginia (Boyles) Hoskinson. After... View Obituary & Service Information

The family of Betty Lou Skarzinski created this Life Tributes page to make it easy to share your memories.

Betty Lou Skarzinski, 88, of Fairmont, passed away on Thursday,...