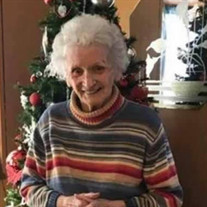 Betty Morgan Betty M. Morgan, 85, of Prickett’s Creek Community passed away peacefully at her home with her family by her side on Saturday, May 15, 2021. She was born in Fairmont on December 21, 1935 a daughter of the late Lloyd and Mary M. Dietz Hawkins. She graduated in 1953 from East Fairmont High School. She had a love for animals and her pets. Betty was a people person who loved to cook for her family. She was a loving and caring person who was loved by everyone. She was a homemaker, loving mother, grandmother, and great grandmother. She worked as the Secretary for Morgan Brothers Construction. She was also caregiver to many for over 30 years. She is survived by two sons Charles “Chuck” Morgan Jr. and his wife Terri of Fairmont, and Richard Morgan and his wife Kathy of Fairmont; two daughters Connie Westfall of Fairmont and Donna Morgan and her fiancé Doug Biafore of Fairmont; her grandchildren Jeff Rager, Brandie Priester, Travis Steele, Brooke Plum, Erica Steele, Zachary Westfall, Zeth Westfall, Kyle Kuroski, JC Smith, Rachel Morgan, Sean Cochran, Shannon Sims, and Courtnie McKnight; great grandchildren Roger Rager, Jude and Chloe Priester, Gage Jekel, Danika, Preston and Jaxson Plum, Kinsey Hardesty, Gavin, Aiden, and Shay Steele, Kaylee and Carter McKnight and Kayla Crites; and one great great grandchild Hadleigh Kennedy. In addition to her parents, she was preceded in death by her husband Charles Ray Morgan in August of 1979; a son Roger Alan Morgan; a daughter Susan Steele; a sister Peggy Dennison; a brother John Williams Hawkins; sons-in-law George Westfall and Mike Steele; and a grandson Shaun Crites. Friends may call at Carpenter and Ford Funeral Home, 209 Merchant Street, on Monday from 10:00 a.m. to 1:00 p.m. A service will be held at the funeral home on Monday, May 24, 2021 at 1:00 p.m. with Pastor Edward Carpenter officiating. Burial will follow at Mt. Zion Cemetery. The Morgan Family would like to thank Amedysis Hospice for the care and compassion provided for their Mom. Condolences may be left for the family at www.carpenterandford.com

Betty Morgan Betty M. Morgan, 85, of Prickett&#8217;s Creek Community passed away peacefully at her home with her family by her side on Saturday, May 15, 2021. She was born in Fairmont on December 21, 1935 a daughter of the late Lloyd and... View Obituary & Service Information

The family of Betty M Morgan created this Life Tributes page to make it easy to share your memories.