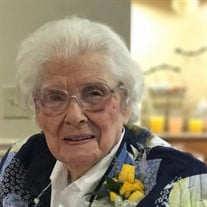 Betty Lucille (Williams) Malone, 95, of the Halleck Road Community passed peacefully from this life on Monday, July 2, 2018, at The Wyngate Senior Living Community in Parkersburg, WV. She was born in Monongalia County, WV, on November 30, 1922, to Benjamin Harrison Williams and Ruth Opal (Shroyer) Williams. Betty graduated from Morgantown High School in 1941 and later from Morgantown Business College. She proudly worked at Moore and Parriott Drug Store for more than 13 years. She later occupied a central position in the Clinical Laboratory Department of the West Virginia University Medical Center, from which she retired in 1975. After retirement, she was able to pursue her many interests including cooking, gardening, quilting and sewing. Betty was lifetime member of the Bethel Baptist Church and an integral member of the Halleck Community. Her garden was a thing of beauty and an invitation to her home for dinner was highly prized not only for the delicious meal, but also for the kindred fellowship. Always most contented when she was busy, Betty’s 95 years on this Earth were spent selflessly sacrificing for the benefit of others. At her core, she was first and foremost, a caregiver in every sense of the word. All of the things she did, she did with great love and great joy, enriching the lives of all those fortunate enough to know her. We must accept that God finally determined that her work on Earth was complete, and called her beautiful soul home for eternal rest. This can be the only explanation, as she would have never departed this world if she thought anything had been left undone. Those privileged to know and love her will certainly mourn her physical absence. However, the enduring legacy of her love leaves a mark on the soul that can never be erased. She is survived by two daughters, Barbara Gissy of Parkersburg, WV, and Mary Ann Rackley of Greenville, SC, one step-daughter, Karen Wolfe (Leonard) of Morgantown, WV, four grandchildren, Mark Rackley (Kristen) of Venetia, PA, Michael Rackley (Beverly) of Cary, NC, Rebecca McCale (Carl) of Vienna , WV, and Leah Gissy of Richmond, VA, one step-grandaughter, Patrice Bullister of Morgantown, WV. She is survived by six great grandchildren: Danielle Rackley, Amanda Rackley, Laura Rackley, Liza Rackley, Samuel McCale, and Hayley McCale. She is also survived by one sister, Lula Mae Sears (Jim) of West Grove, PA, two sisters-in-law, Shirley Williams of Deland, FL, and Lula Mae Shaffer of Pisgah, WV, and many beloved nieces and nephews. She is now, at long last, reunited with her beloved husband of 29 years, Walter R. Malone, who has been patiently preparing a place for her among the angels since his passing in 2004. Without a doubt, Betty’s parents and three brothers who preceded her in death were also anxiously awaiting her arrival for a long overdue reunion: Ralph Williams (Dottie), Norval Williams (Oleta), and James Williams. She was also preceded in death by two sons-in-law, Robert Rackley and Robert Gissy. The family would like to acknowledge and extend heartfelt gratitude to the staff of The Wyngate Senior Living Community and Amedisys Hospice of Parkersburg for providing exceptional care during Betty’s last years, and for truly becoming part of her extended family.

Betty Lucille (Williams) Malone, 95, of the Halleck Road Community passed peacefully from this life on Monday, July 2, 2018, at The Wyngate Senior Living Community in Parkersburg, WV. She was born in Monongalia County, WV, on November 30, 1922,... View Obituary & Service Information

The family of Betty Lucille Malone created this Life Tributes page to make it easy to share your memories.