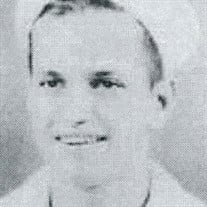 Bernard Eldora Kisner, 95, of Fairmont, left his earthly home to join his Lord and Savior on Sunday, April 21, 2019. He was born on February 07, 1924, in Fairmont, a son of the late Squire Monroe “S.M.” Kisner and Elizabeth Stella (Moran) Kisner. He was one of 13 children. After graduating Fairmont Senior High School, Bernard proudly served his country in the United States Navy from 1942-1946 during WWII on the U.S.S. Prairie as a Petty Officer First Class. He was seldom not seen without his U.S. Navy or WWII Veteran hat. He was a partner at the S.M. Kisner & Sons Sheet Metal Shop on Speedway from May 1942 to his retirement in May 1992; he loved his work at the family’s sheet metal and roofing shop, originally known as S.M. Kisner and Brothers, later known as S.M. Kisner and Sons, which started in 1913. He was known to all as a kind and compassionate person; he was a devoted husband, father, grandfather, great-grandfather, uncle, father-in-law, and friend. He had a gentle spirit and loved reminiscing over fond memories, going to auctions, antiquing, telling stories, watching football, taking long drives, and visiting with family and friends. He loved his hometown of Fairmont and showed pride in all things West Virginia. His family is comforted by the knowledge that he is with his God in Heaven. Bernard was a faithful member of the White Hall Church of Christ; he loved his church, its teachings, and the many Christian friendships he made with his Church of Christ family throughout the years. Bernard is survived by his devoted wife of 73 years and the love of his life, Virginia Dare (Fluharty) Kisner. He is survived by son, Randy Kisner and wife Margaret, of Fairmont; daughter, Peggy (Kisner) Slider and husband Tom, of Fairmont; granddaughter, Kimberly Jean (Slider) Ragen and husband Michael; and great-grandson, Ian Timothy Vandegrift. He is also survived by sisters: Kathryn Irene Newbrough, of Fairmont, Virginia Mae Short, of Fairmont, and Joyce Chloe Watkins, of Hawaii, as well as several loving and devoted nieces and nephews. In addition to his parents, Bernard was preceded in death by brothers: William Frederick Kisner, Richard Kisner, Rex Monroe Kisner, Odbert Kisner, John Wendell Kisner, Max Kisner, Howard Albert Kisner, and James Edward Kisner; sister, Dora Kisner; and stepmother, Clarissa Belle (Keller) Kisner. Family and friends are welcome to call at Carpenter and Ford Funeral Home, 209 Merchant St., Fairmont, on Tuesday from 5 p.m. – 8 p.m., Wednesday from 1 p.m. – 8 p.m., and on Thursday from 10 a.m. – 11 a.m., with services being held at the funeral home on 11:00 a.m. on Thursday, April 25, 2019, with Evangelist Kevin Lough officiating. Interment will follow at Grandview Memorial Gardens with Full Military Rites provided by the United States Navy and the Marion County Veteran’s Honor Council.

The family of Bernard Eldora Kisner created this Life Tributes page to make it easy to share your memories.