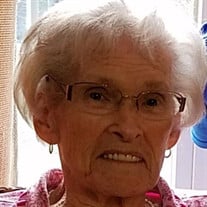 On July 05, 2019, Beatrice “Bea” Marie (Butcher) Kisner, 88, of Fairmont, got her wish granted and prayers answered -- she took her last breath on earth and her first in heaven, where she went to be with her Lord and Savior, Jesus Christ. She was born on March 05, 1931, in Fairmont, the fourth child of the late Isaac Franklin Butcher and Madge Marie (Harris) Butcher. She started her career at Westinghouse/North American Philips and it was at that time she was introduced to and later married to the love of her life, the late Sherman L. Kisner, on April 17, 1948. They were married for 57 years. Bea was a devout Christian and attended Rhea’s Chapel Methodist and St. Paul’s United Methodist Church in Watson all her adult life. She worked at many places performing a host of tasks, but the job of being Mom and Mamaw was her most loved of all. To Bea, family was everything, and she was a very protective of her family. Bea is survived by children: Ronald (Sonja) Kisner, of Ohio, Sharon (Ray) Lucas, of Fairmont, and David (Marcia) Kisner, of Fairmont; brother, Verlin (Roberta) Butcher, of Lewisburg; daughter in law Marsha Kisner, of Fairmont; and nine grandchildren: Kelly McMahan, Scott Kisner, Jennifer Meadows, Tina Smith, Marci Sailor, Eric Kisner, Kristen Nottingham, Zach Kisner, and Reegan Kisner; ten great-grandchildren; a host of nieces and nephews; special friend, Dottie Sanson; and neighbors, Skip Amos and Rick Post. In addition to her parents and husband, she was preceded in death by son, Sherman Keith Kisner; three brothers: Bernard, Robert, and Beverly Butcher – Bea was the third sibling to pass in exactly a one-year time period; and a dear lifelong friend, Shelley Thompson. Bea’s family would like to extend their gratitude to the St. Barbara’s Nursing Home staff, who took excellent care of their mother, as well as WV Caring Hospice, for the friendship and assistance extended to their mother. Family and friends are welcome to call at Carpenter and Ford Funeral Home, 209 Merchant St., Fairmont, on Tuesday, July 09, 2019 from 10 a.m. – 2 p.m., with services being held at the funeral home at 2:00 p.m. with Pastor Clyde Beard officiating. Interment will follow at Mt. Zion Cemetery.

On July 05, 2019, Beatrice &#8220;Bea&#8221; Marie (Butcher) Kisner, 88, of Fairmont, got her wish granted and prayers answered -- she took her last breath on earth and her first in heaven, where she went to be with her Lord and Savior, Jesus... View Obituary & Service Information

The family of Beatrice Marie Kisner created this Life Tributes page to make it easy to share your memories.