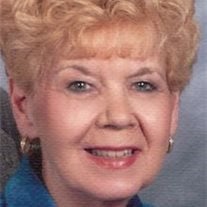 Barbara Rowe Barbara Ann (Chocko) Rowe, 73, of Fairmont passed away Thursday, October 20, 2011 at her home. She was born in Pine Bluff, Harrison County on December 10, 1937 a daughter of the late Nicholas and Florence Elizabeth (Brown) Chocko. Barbara was retired from BB&T Bank where she worked in customer service as a teller and supervisor for over 30 years. She was a graduate of Fairmont Senior High School and was a member of the Baptist Temple where she enjoyed donating her time helping with various events. She is survived by two sons, Timothy W. Rowe of Fairmont and James Michael Rowe and his companion Marianne Frazier of Fairmont, one daughter, Cynthia Shomo and her husband Timothy of Farmington, two grandchildren, Shannon Batson and her husband Adam of Carolina and Stephanie McLain and her husband Frank of Fairmont, and two great-grandchildren, Savannah Batson and Grayson Batson. Also surviving is her sister, Sandra "Sandee" Chocko of Fairmont. In addition to her parents, she was preceded in death by her loving husband of 53 years, Harry Herschell "Sonny" Rowe in February of 2009, a son, Jeffrey Alan Rowe, and a niece, Cassandra Villers. Family and friends may call at Carpenter and Ford Funeral Home, 209 Merchant St., Fairmont on Saturday from 1-8 pm and on Sunday from 12-2 pm. The funeral service will be held in the funeral home on Sunday, October 23, 2011 at 2 pm. Interment will follow at Woodlawn Cemetery in Fairmont. The family would like to extend a special thanks to Amedisys Hospice of Anmoore, especially Johnette Wolfe, for all of their wonderful care and compassion of Barbara during her illness. In lieu of flowers, memorial donations may be made in her memory to Amedisys Hospice of Anmoore, PO Box 366, Anmoore, WV 26323. Online condolences may be left for the family at www.carpenterandford.com

The family of Barbara Ann Rowe created this Life Tributes page to make it easy to share your memories.