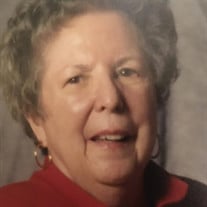 Barbara Adamson Nye, 92, passed away on Tuesday, July 24, 2018, at St. Barbara’s Nursing Home in Monongah, West Virginia. She was born and raised in Nelsonville, Ohio, the only child of Jeffrey Dwight (“JD”) Adamson and Beatrice Cook Nelsonville, Ohio. Barbara graduated from Ohio University in Athens, Ohio, where she majored in Accounting and Business, and thereafter worked for Quaker State Oil Company in Logan, Ohio, for many years in the Accounting Department. Barbara married Dr. Richard Piersol Nye, of Athens, Ohio, in 1964, and then proceeded to move to Cincinnati, Ohio, where they spent many joyous years together. She was preceded in death by her husband, Richard Nye, as well as her parents, uncle, many aunts, and many cousins. Barbara is survived by numerous cousins, including Gary (Linda) Jack of Fairmont, West Virginia, Cathy (Eric) Erickson of Dublin, Ohio, two stepsons, Clinton (Linda) Nye and David Nye of Florida, and a nephew-in-law, Bob (Sandy) Nye of Mansfield, Ohio. She was a member of Westwood First Presbyterian Church in Cincinnati, the Nelsonville Methodist Church, and was involved in numerous volunteer activities, including the Shriners Burns Hospital for Children in Cincinnati. A funeral service will be held at Warren Brown Funeral Home, located at 80 E. Washington St., Nelsonville, Ohio, on Friday, August 03, 2018, at 1:00 p.m., with the Reverend Rebecca I. Mihm, of Fairmont, officiating. Friends and family will be received at the funeral home for two hours prior to the funeral service from 11 a.m. to 1 p.m. Interment will be held at Greenlawn Cemetery in Nelsonville, Ohio, immediately after the funeral service. In lieu of flowers, the family requests that donations be made in memory of Barbara Nye to St. Barbara’s Memorial Nursing Home, P.O. Box 9066, Monongah, WV, 26554, or a charity of choice.

The family of Barbara Adamson Nye created this Life Tributes page to make it easy to share your memories.