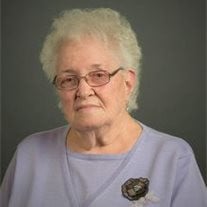 Barbara J. Carpenter Barbara Jane Carpenter, 79, of Pleasant Valley passed away on Friday, May 11, 2018 at United Hospital Center surrounded by her loving family. She was born in Fairmont on August 18, 1938 one of nine children born to the late Nathan Walter Kittle and Dorothy Ada (Garlow) Kittle. Barbara graduated from East Fairmont High School in 1956. She worked 35 years as a Telephone Operator. She began her career with C&P Telephone in Mannington followed by New Martinsville and Fairmont. She retired from AT&T in Clarksburg. Following her retirement, Barbara lived the life she most enjoyed, cooking, baking, canning and watching her grandchildren. She is survived by her devoted husband, Columbus "Bud" Carpenter; her son, Micheal Carpenter and his wife, Gina of Bridgeport; a step son, Joseph Carpenter of Fairmont; a step daughter, Becky Stanley and her husband George of Martinsburg; four very special grandchildren, Daniel Stutler of Fairmont, Shawn Stutler of Fairmont, Levi Carpenter of Beckley and Christopher Carpenter of Fairfax, Virginia; and two great granddaughters, Cheyenne Stutler and Talia Stutler. Also surviving are two brothers and their families. In addition to her parents, Barbara was preceded in death by her daughter, Melissa Dawn Carpenter; two sisters, Karen Sue Kittle and Sharon Kay Gaines and four brothers, Grady Lee Kittle, Gary Eugene Kittle, Delbert Kittle and Nathan Earl Kittle in infancy. Mrs. Carpenter's family would like to thank the staff of United Hospital Center for their compassionate care during her illness. Friends and family will be received at the Carpenter & Ford Funeral Home, 209 Merchant Street, Fairmont on Monday from 4pm to 8pm and on Tuesday from 11am to 2pm. The funeral service will be at 2pm on Tuesday, Mary 15, 2018 at the funeral home with Pastor Jim Zinn officiating. Interment services will follow at Grandview Memorial Gardens. In lieu of flowers, memorial contributions may be made to the Korean Veterans Memorial, c/o MVB Bank, 301 Virginia Avenue, Fairmont, WV 26554. Online condolences and memories may be shared with Barbara's family at www.carpenterandford.com.

Barbara J. Carpenter Barbara Jane Carpenter, 79, of Pleasant Valley passed away on Friday, May 11, 2018 at United Hospital Center surrounded by her loving family. She was born in Fairmont on August 18, 1938 one of nine children born to the... View Obituary & Service Information

The family of Barbara Jane Carpenter created this Life Tributes page to make it easy to share your memories.