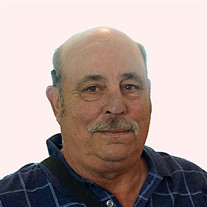 Arval Dayton Channell, 67, of Williams Crossroads in Fairmont, WV, passed away on Wednesday, April 1, 2020, at J. W. Ruby Memorial Hospital. Arval was born June 20, 1952, in Fairmont, a son of the late Argle and Ruth Channell, of Kingmont. He graduated from East Fairmont High School in 1971. Arval worked for May Brothers and as a stonemason before becoming a coal miner. He was a member of UMWA and retired from Robinson Run Coal Mines. Arval was an avid hunter and fisherman for most of his life. Over the years he qualified to fish in several State Bassmasters Tournaments, was a past president of Mountain State Bassmasters, and was a current member of the Tri-County Bass Club. His fishing knowledge was sought by many. Arval enjoyed making fishing lures under the name of PeeWee Crafts and Moulding. He loved the time he spent with his wife, children, grandchildren, and his faithful canine companion, Midnight. Arval also enjoyed being outside on his tractor and visiting his neighbors. On February 15, 1974, Arval married his high school sweetheart, Barbara Jean Williams, who survives. He is also survived by daughter, Tammy Lynn Rumer and her husband, Joshua; son, Jeffrey Dayton Channell and his fiancée, Amy Persinger; son, Justin Michael Channell and his wife, Ashley; three grandchildren: Aethan Nathaniel Channell, Arya Rose Channell, and Willow Dayne Rumer; sister, Sheila Ann Hawkins and her husband, Terry; mother-in-law, Hallie Mae Williams; as well as many nieces and a nephew. In addition to his parents, he was preceded in death by brother, Roger Lee Channell, and father-in-law, Harold S. Williams. In keeping with the family’s wishes, a private service will be held with interment taking place at Beverly Hills Memorial Gardens. A Celebration of Life will be held at a later date.

The family of Arval Dayton Channell created this Life Tributes page to make it easy to share your memories.