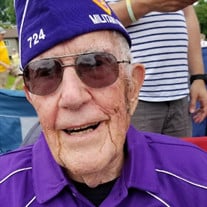 Arthur "Art" W. Vincent, one of Marion County's last surviving World War II veterans, passed away Sunday, July 4, of natural causes in Fairmont, according to his family. Growing up in Colfax, Vincent had rarely traveled further than downtown Fairmont by streetcar when he graduated from East Fairmont High School in 1942. After a brief stint supporting the war effort at a ball bearing factory in Connecticut, Vincent was drafted into the Army's Seventh Army, 70th Infantry Division, and sent to the French-German border to help repel the Nazi's in the Battle of the Bulge. His mission there in January, 1945, was to retake the village of Wingen-sur-Moder, France, house by house, building by building. While storming the town's train station—an objective vital to preventing Germany from sending in fresh troops from Belgium—Vincent was shot by a Nazi sniper. Wounded in the leg, he and his unit were surrounded and trapped overnight until Allied reinforcements could rescue them in the morning. He would later recall with a smile how he received his Purple Heart shortly thereafter. Recovering in a hospital ward in Paris, the Eiffel Tower visible from his window, each wounded soldiers' medal was simply tossed on their bed. (Vincent would later receive the Legion of Honor from the French government with much more pomp and circumstance at the French Embassy in Washington, D.C., some 70 years later.) Vincent returned to Fairmont, marrying his college sweetheart, Glendine Sue Boyd, in 1952. He graduated from Fairmont State and West Virginia University with bachelor's and master's degrees, respectively, in education and botany. At WVU he studied under the famed botanist Dr. Earl L. Core, completing his masters thesis on mints found in West Virginia. Vincent then embarked on a career teaching at East Fairmont, Barrackville, and Monongah High Schools, before moving on to sell textbooks for Henry Holt & Company. He travelled the state extensively in his career—Arthur truly never met a stranger. He retired in the 1980's, but remained an active member of his community and his church, Meadowdale United Methodist H&H Chapel, until the very end. He loved gardening, his flowers, and plants. He lived for his family and was always there for everyone. He was preceded in death by his wife of 56 years, the love of his life, Glendine "Dean" Sue Boyd Vincent; his parents, Virgil E. Vincent and Effie McCord Vincent; a brother, James Vincent and wife Phylis Vincent; two sisters, Bernice Vincent Brown and Beatrice Vincent Furey; and his granddaughter, Susie A. Vincent Harding. Vincent is survived by his daughter, Jenni Vincent, and her husband, Ron Springer, of Hedgesville, W.Va.; his son, David Wayne Vincent, of Fairmont; his grandchildren, Alex Springer-Post, of Leesburg, Va., and her husband, James Post, of Hedgesville, W.Va., Andrew Springer of Los Angeles, Ca.; a grandson-in-law, Scott Harding, of Mannington; and great grandsons, Brandon Harding, of Fairmont, and Ty and Jackson Post of Leesburg, Va. Family and friends are welcome to call at Carpenter and Ford Funeral Home, 209 Merchant St., Fairmont, on Thursday from 4:00 – 8:00 p.m. and on Friday, July 9, 2021, from 12:00 p.m. until the time of the funeral service at 2 p.m., at the funeral home, with Pastor Randy Vincent, officiating. Interment will follow at Woodlawn Cemetery, with military honors conducted by the Marion County Veterans Council Military Honor Guard and the U.S. Army Honor Guard. In lieu of flowers, the family asks donations be made to Meadowdale United Methodist Church Willing Workers, 141 Mt. Harmony Road, Fairmont, W.Va. 26554. Condolences and memories may be shared with the family at www.carpenterandford.com. Just days ago, planting flowers with family in front of the house he built in Meadowdale shortly after the War, Vincent reminded us, "the ugliest flower is better than no flower at all."

The family of Arthur W. Vincent created this Life Tributes page to make it easy to share your memories.