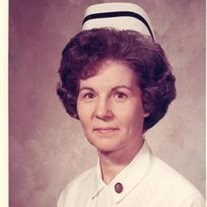 Angelena Davis Angelena Alvarez Davis, 85 of Fairmont passed away on Monday, June 7, 2010 at Ruby Memorial Hospital in Morgantown. She was born at Coffman in Taylor County, on February 10, 1925 a daughter of the late Angelo Alvarez and Audra (Jenkins) Alvarez Neel. She was the step-daughter of the late Claude L. Neel. She is survived by her husband J. Richard “Zeke” Davis to whom she was married on August 28, 1946. Also surviving are three sons and daughters-in-law, Richard F. and Betty Gaye Davis of Florida, James Douglas and Donna Davis of Fairmont and Jay Bradley and Jennifer Davis of Charleston; a sister and brother-in-law, Manuella Estel of Glady Creek; four grandchildren, Ashley Marie Van Tromp and her husband Justin of Arlington, Virginia, Christina Nicole Davis of Arlington, Virginia, Brandon Douglas Davis of Fairmont and Matthew Richard Harris of Asheville, North Carolina. Angelena was a registered nurse, a graduate of the Nursing Program of Fairmont State College. She retired from Fairmont General Hospital in 1988 with 18 years of service. Her hobbies included, flower gardening, quilting and bird watching. She was a member of the Fairmont Seventh-day Adventist Church. In addition to her parents and step-father, she was preceded in death by an infant son. At the request of the deceased, private services were held on Wednesday, June 9, 2010 at Carpenter & Ford Funeral Home with Pastor James Volpe and Pastor Randall Murphy officiating. Interment followed at Pisgah Cemetery. Memorials may be made to the Seventh-day Adventist Church, 9 Oakwood Road, Fairmont, WV 26554 or Fairmont State College Foundation, General Nursing Scholarship, 1201 Locust Avenue, Fairmont, WV 26554. Online condolences may be sent to the Davis Family at www.carpenterandford.com.

Angelena Davis Angelena Alvarez Davis, 85 of Fairmont passed away on Monday, June 7, 2010 at Ruby Memorial Hospital in Morgantown. She was born at Coffman in Taylor County, on February 10, 1925 a daughter of the late Angelo Alvarez and Audra... View Obituary & Service Information

The family of Angelena Angie Davis created this Life Tributes page to make it easy to share your memories.