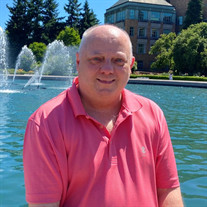 Alex James “Birddog” Gibson, 53, of Morgantown, WV, passed peacefully on Sunday, October 10, 2021, surrounded by his loving family. Alex was born August 31, 1968, to the late John Wilson and Bertha Jane Darby Gibson. Alex bravely served our country in the U.S. Army for 20 years, serving two tours overseas including Desert Storm. He was very proud of his military service. Alex later worked as a corrections officer at the Pruntytown Correctional Center. He graduated from Mann Highschool and was a member of the VFW 629 and Acacia Lodge 157 of Fairmont. He loved camping, his country, and his family. He was a deeply devoted husband and a loving caretaker to his wife, Teresa. Alex is survived by his wife of 14 years, Teresa Shipley-Gibson, his sons Adam Randall McCormick of SC, and Johnathan Derrick Gibson of NC, his daughters Autum Downey of WA, and Raina Brown of WV, his sisters Mandy Robinette and her fiancé David Summerfield, and Priscilla Lynn Lowe, all of WV. He is also survived by his grandchildren Joslynn Newell, Amber Jones, Brandon Jones, Riley McCormick, and several neices and nephews including Kristen Michelle Adkins, John Roger Adkins, and Cory Douglas Shipley, his mother-in-law Greta Shipley and father-in-law Douglas Shipley. In addition to his parents, Alex is predeceased by his sisters Phyllis Nicole Adkins and Alice Mollet, his nephew Mikey Toler, and his brother David Gibson. Family and friends are welcome to call at Carpenter and Ford Funeral Home, 209 Merchant St., Fairmont, WV 26554, on Tuesday, October 12, 2021, from 3 p.m. to 8 p.m. and on Wednesday, October 13, from 9 a.m. until the time of the funeral service at 10 a.m. with Pastor Ruth Hall officiating. Burial will follow at WV National Cemetery where full military honors will be conducted.

The family of Alex James Gibson created this Life Tributes page to make it easy to share your memories.