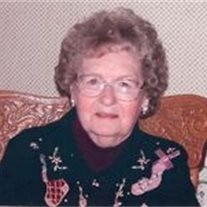 A. Ruth Cole Riefer A. Ruth Casto Cole Riefer, age 88, of Fairmont went to be with the Lord on Friday, September 4, 2009 while in the home of her long time friend and caregiver, Toni Iaquinta and daughter Conchetta. Ruth was born in French Creek on May 8, 1921 a daughter of the late Verna Margaret and Eckron Hugh Casto. She was preceded in death by her first husband, Waitman Lemley Cole who was killed in action during WWII and her second husband Francis Anthony “Hank” Riefer a WW II veteran and long time employee of Owens Illinois. Ruth was a member of Diamond Street Methodist Church and attended the Baptist Temple later in life. She was a volunteer for the Republican Party, a Brownie and Girl Scout Leader and a life long member of Woodman of the World Society. She was a wonderful mother, an excellent seamstress, a great cook and loved watching all sports. Ruth loved her children and grandchildren and spending time with them brought her great joy. She will be sorely missed by all of us who loved her and held her dear to our hearts. She is survived by three daughters, Sharon Cole Stanley and her husband Dirk of Dayton, Ohio, Brenda Riefer Smith and her husband Robert of Monongahela, Pennsylvania and Barbara Riefer Wise and her husband Jeff of Fairmont; a step son Hank Riefer on Monongah. She is also survived by nine very special grandchildren, Samantha Stanley Fletcher of Tampa, Florida, Lucas Smith of Monongahela, Pennsylvania, Adam Smith, of Monongahela, Pennsylvania, Matthew Smith of Monongahela, Pennsylvania, Joshua Wise of Morgantown, Mandy Wise Nuzum of Fairmont and Chad Wise of Fairmont, Scott Riefer of California and Jessica Riefer of Manassas, Virginia; six great grandchildren, Colton Fletcher, Rhyan Smith, Maicee Smith, Caden Smith, Emma Smith and Alexa Riefer; as well as several nieces and nephews; extended family members and friends. In addition to her parents and husbands, Ruth was preceded in death by her sister Mary Ellen Bennett and her brother, John Elliott Casto. Friends and family may call at the Carpenter & Ford Funeral Home, 209 Merchant Street, Fairmont on Tuesday from 2pm to 8pm and Wednesday from 10am to 11am. The funeral service will be held at 11am on Wednesday, September 9, 2009 at the funeral home with Chaplain Dwight Baldwin officiating. Interment services will follow at Beverly Hills Memorial Gardens in Westover. Memorial Contributions may be made in Mrs. Riefer’s memory to Hospice Care, 1408 Country Club Road, Fairmont, WV.

A. Ruth Cole Riefer A. Ruth Casto Cole Riefer, age 88, of Fairmont went to be with the Lord on Friday, September 4, 2009 while in the home of her long time friend and caregiver, Toni Iaquinta and daughter Conchetta. Ruth was born in French... View Obituary & Service Information

The family of A. Ruth Riefer created this Life Tributes page to make it easy to share your memories.